You are here: Home / They Read / Book Reviews: The Sandalwood Tree 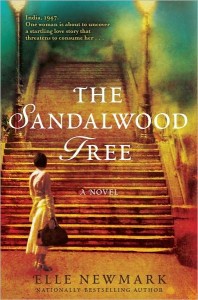 The Sandalwood Tree: A Novel

Author: Elle Newmark
In 1847, Martin Mitchell is on a newly established Fulbright scholarship to write his Ph.D. thesis on Indian history.  Martin’s wife, Evaleen (Evie) and their 5 year old son Billy accompany him, for Evie loves the thought of the exotic and they both feel Billy will be exposed to a different culture.  The University of New Delhi allows them a beautiful Victorian style bungalow with a beautiful sandalwood tree leafing the yard in Masoorla, India.  While cleaning the sooty kitchen bricks, Evie discovers a packet of letters from the 1850’s, written by Adela Winfield to Faithe Chadwick, the long ago occupants of the bungalow.  Faithe and Adela have experienced the Sepoy Rebellion in 1857, while Martin, Evie and Billy find themselves caught within the 1847 Partition, as Britain gives India its freedom by forming two countries, Pakistan and India, one state for Muslims, the other for Hindus.
Martin’s nightmares and altered behavior causes Evie to suffer terribly.  For Martin has returned from World War II a changed man, and he refuses to divulge his war experiences to Evie.  As he puts up his barrier, Martin cannot feel love for the wife and child he adores, although he thinks he is protecting them.
Anyone who cherishes historical novels will adore Elle Newmark.  As her novel swings from Evie and Martin’s lives in a colonial British country, it sways into the unconventional lives of Faithe and Adela.  Newmark juxtaposes the stories in and out of each other, with talent and seamless reading.
As Martin distances and dresses more and more like the natives, Evie finds herself alone in an intolerable marriage situation and in a chaotic and confused time in India.  But as she sets out to find the story of Adela and Faithe, Evie learns through Adela’s letters how to learn acceptance and compassion for her blighted marriage, her son’s horrible experiences in this complex country, and own faulted humanity.
India appears in all its locale and nuances, its poverty, its religions, and its peoples ancient patience within its British colonization, and Newmark demands that we enter into its culture as well as Martin and Evie.  As 1940’s India fights for its future under Ghandi, Evie fights too.
A lush, compelling novel with a locale that both entices and horrifies, Newmark’s characters rush from the pages like the sandalwood tree, firm, resilient and full of scars, only to stand tall in the winds of war at the end.  The Sandalwood Tree is not only a historical gem, but a well written and thoughtful novel of lives intertwined and wounds that heal.

The Sandalwood Tree: A Novel

is available in bookstores around the country and include the stories above plus more.