You are here: Home / They Watch / Upcoming Releases: African Cats 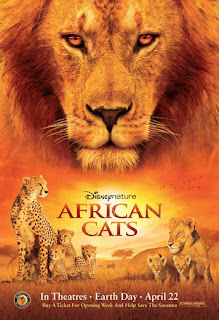 We have had the pleasure of reviewing a couple of DisneyNature’s wonderful DVD’s aimed at the entire family. While they’re beautiful to watch on DVD and Blu-Ray, imagine sitting in a theater and being surrounded by the sounds and sights of these magnificent African Cats?

This film tells the true story set against the backdrop of one of the wildest places on Earth of these majestic beasts. “African Cats” captures the real-life love, humor and determination of these kings of the savanna. Narrated by Oscar®-nominated actor Samuel L. Jackson, the story features Mara, an endearing lion cub who strives to grow up with her mother’s strength, spirit and wisdom; Sita, a fearless cheetah and single mother of five mischievous newborns; and Fang, a proud leader of the pride who must defend his family from a rival lion and his sons. Disneynature brings “The Lion King” to life on the big screen in this True Life Adventure directed by Keith Scholey and Alastair Fothergill (“Earth”). An awe-inspiring adventure blending family bonds with the power and cunning of the wild, “African Cats” leaps into theatres on Earth Day, April
22, 2011.

As the April 22 opening of  “African Cats” draws closer, Disneynature is trying to raise awareness of its “See ‘African Cats,’ Save the Savanna” program. During the film’s opening week (April 22-28), a portion of the proceeds from that week’s ticket sales will be donated to AWF through the Disney Worldwide Conservation Fund to protect the Amboseli Wildlife Corridor, a passage between the Amboseli, Tsavo West and Chyulu Hills National Parks that is frequently used by lions, cheetahs, elephants, zebras, giraffes and a host of other animals in the African savanna.

AFRICAN CATS hits theaters everywhere on Earth Day, April 22nd!
Here are a few things you can do to help make a difference and raise awareness


Join the “African Cats” grassroots community and donate to the African Wildlife Foundation on Causes:
http://www.causes.com/africancats

Buy tickets through Disney Tickets Together, invite friends and Disneynature will double its donation:
http://www.DisneyTicketsTogether.com