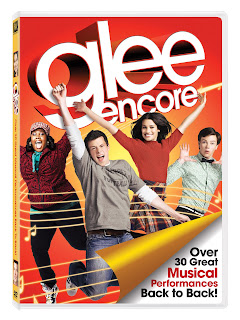 Win a DVD copy of Glee’s musical numbers from the first season, out on DVD/Blu-ray on April 19th
Get ready, young Gleeks! With the newest release from this hit Fox TV show, younger fans of the popular program can enjoy the simple innocence and fun of the show, combined with the music they love all – all in one place!  With this new all-music version of the DVD, Moms can sit back, relax and turn off their “Parental Control”, as we have created a more family friendly home viewing experience that focuses on the fun of the music rather than the mature themes.
Glee Encore takes more than 30 show-stopping numbers from the first season and combines them for a fun-filled, all-music version of the series that kid and tween fans can sing along to and share with friends at slumber parties and after school get-togethers!
Glee Encore features performances by stars Lea Michele, Chris Colfer, Matthew Morrison, Cory Monteith, Amber Riley and guest star Kristin Chenoweth. Popular songs available on the DVD include “Don’t Stop Believing,” “Gold Digger,” “I’ll Stand By You,” “True Colors,” “Jesse’s Girl” and “Total Eclipse of the Heart.” Glee is produced by Ryan Murphy Television in association with 20th Century Fox Television and is currently in its second season.
For your chance of winning a copy of Glee Encore on DVD, simply answer the following question:
Which Glee guest star appears on the Glee Encore release?
·         Gwyneth Paltrow
·         Britney Spears
·         Kristin Chenoweth
To learn more see our review and giveaway HERE
« Book Reviews & Giveaway: In Zanesville
DVD Reviews: The Scream Trilogy »