You are here: Home / They Watch / DVD Reviews: The Next Three Days 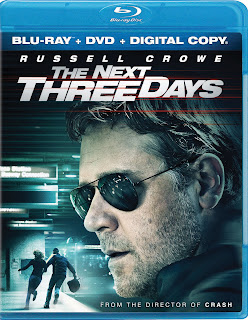 The Next Three Days

Is it me or does Elizabeth Banks look increasingly like Chelsea Handler just not as funny. I decided to review this film because I really enjoy Prison escape flicks. I was absolutely hesitant to watch it because I genuinely despise Paul Haggis’s work with the exception of the writing of Million Dollar Baby, however I do think there is greatness living someplace in Walker Texas Ranger. Mainly my hatred of Haggis comes from the film Crash. I really thought it was trite and poorly written. This was alone watch for me the wife to be was just
not interested. So I put my big boy pants on and plopped my ass down on the couch.

Here is where I would really love to say, annoying jack-ass devises completely ridiculous plan to break wife who may or may not be guilty out of jail, and that’s it. But I owe it to you to write more. Lara Brennan is arrested for murdering her boss with whom she had an argument. It seems she was seen leaving the scene of the crime and her fingerprints were on the murder weapon. Her husband, John would spend the next few years trying to get her released (through the “legal” system), but there’s no evidence that negates the evidence against her.

When the strain of being separated from her family, especially her son, gets to her, John decides to break her out. He consults a successful escape artist turned author, and he starts planning: he’ll need to disrupt jail routine, get IDs and passports, know how to evade a dragnet, find a destination, and squirrel away cash. Then, he gets word that Lara will be transferred to prison within the next three days. He’s out of time, and has to break her out of jail. 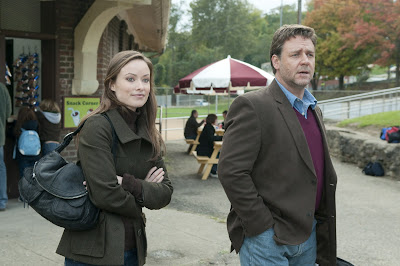 I really did not get what the film was trying to accomplish because it did a great job of flirting with some excellent themes. Law and its violation – can it be avoided to condemn innocent? How do we know if someone’s innocent? Obviously, through the logical deduction (hopefully sound). Can we afford to have one innocent condemned person in prison? Would it rather be better to free 100 guilty instead? Crowe as a teacher questions his students’ value of logic in Don Quixote. His standing by his wife is an expression of supra-logical belief in her innocence. (b) What is true love that compels the husband to risk his own life in order to free his wife. Is it right what he did, or wrong? What is the basis for our moral judgment? I found germs of interesting ideas to be pondered but very little in their development. The ending, no matter how cute, presented question enough for another film.

I really did not get the chemistry between Crowe and Handler I mean Banks. Its obvious the director really wanted them to seem in love because in the first 5 scenes they share of the film they can be seen making out. Why does she look so damn guilty right before she gets arrested and then the film ends the way that it did. Crowe’s character is completely inconsistent, which may or may not be the point. He goes from teaching Don Quixote to capping drug dealers in seconds is this what not making out with your wife (for five seconds) does to a man?

This film absolutely nails the escape sequence. Which is why I actually enjoyed the film film quite a bit. It never failed to be exciting. That is the most important thing a film of the prison escape genre can do, be exciting. The escape is about the final third of the film murphy’s law goes into effect and the viewer is just waiting for there to be problem after problem. All hell breaks loose and it was everything thing that I could have imagined came true and redeemed this film.

The special feature are pretty good on this one. The commentary was great and informative. The deleted and extended scenes did nothing for me. The making of feature really just compared it to the original French film. There were a few other features that did nothing for me as well.


Over all this film had one of the best prison escapes I have ever seen. However bogging it down in all that bullshit was freaking excruciating at times. I really did like the fact that they left the murder ambiguous, that was a really cool touch. Overall, it’s just a rental that was mediocre.

is available at retailers now.