You are here: Home / They Watch / DVD Reviews: The Little Engine that Could 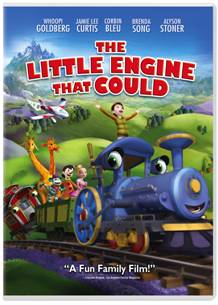 Little Engine That Could

Voices of:  Whoopi Goldberg (The Dreamland Train Tower), Alyson Stoner (The Little Engine), Jamie Lee Curtis, Corbin Bleu, Brenda Song
I am totally enchanted!  Although this animated DVD shouts KIDS as its audience, that little kid in me that cherished her 25cent Little Golden Book, “The Little Engine That Could,” embraced this DVD with a cheer and a clap!  For who amongst us doesn’t love the brace Little Engine spouting, “I think I can…I think I can!”?
I simply fell under the movie’s spell, sank into the sofa, and watched, mesmerized.
The beauty of this animated film is not only its theme – with a bit of courage and belief in yourself you can do anything – but the animation itself.   Stunning, gorgeously visual (check out the Magic Mushroom Forest!) it carries a story line that creates a soft melody in our hearts.  So enchanting that I fell under its spell!
This is the story of Richard, who finds himself transported into the Dreamland Engine Yard when he goes through the Dream Mountain Tunnel.  There, Richard finds the Little Engine, who dreams of becoming a Dream Hauler – the task of the Big Engines, who haul Children’s Dreams and Wishes to the Real World.  When Richard goes through the Tunnel, it collapses.  Dreamworld despairs.  How can the Big Engines get their magical cargo through Dream Mountain?
The Little Engine and Richard listen to Rusty, one of the Dream haulers, that there are Old Tracks AROUND the mountain.  As they set off, Richard and Little Engine run into another small train that has run off the tracks.  Richard and Little Engine pull the Cross Switch and Little Engine hitches onto the Toy Train.  For the other engine is carrying TOYS – a hysterical clown, a yarn monkey, a wooden soldier, toy giraffes and a pink ballerina.  Off they go, because the Toy Train has to hurry to The Real World.  For the children have already WISHED for their toys, and it they don’t arrive fast, the children will forget their wishes and the TOYS will be forgotten and cease to exist!
As the Little Engine, Richard the Real Boy, the Clown and the Other Toys brave the treacherous journey over a hanging bridge that collapses mid journey, and other disasters, they learn that ANYTHING can be accomplished.  They find that Rusty the Dream Hauler is right for he has told Little Engine:  “If you think you can, it will happen!”
An absolute delight of a DVD.  Whoopi Goldberg is amazing (as always) as The Tower, who runs the Train Yard with an iron voice and attitude, and Alyson Stoner as the Little Engine could not be better!  Not only a great family film, but a visit to bedtime story nostalgia in this reviewer’s view!  Simply entrancing.
Universal Studios Home Entertainment
1 hour 22 minutes
Rated G
In theaters March 5, 2011, on DVD March 22, 2011
Little Engine That Could

is available nationwide on DVD.
Ratings are based on a 5-star scale

« DVD Reviews: The Next Three Days
Book Reviews & Giveaway: The Terror of Living »