You are here: Home / They Watch / CD Reviews: The Family Garden 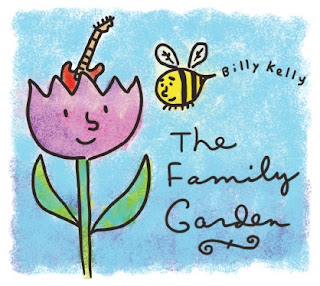 The Family Garden
by Billy Kelly

Out in the yard there’s a patch of dirt
where the sun shines hard and the sprinklers squirt,
where me and my whole family love to go ….

This is the silliest (in a good way!) child’s CD I have heard!  Kids will ADORE this funny, irreverent and relevant silly songfest with Billy Kelly’s tambourine like vocals and absurd sense of humor.  With songs that snap with the imagination and creative spirit of kids everywhere, Billy’s originals take us to the playground, the garden, and the mind of a child at play.
As Billy and his band, the Blahblahblahs, joke and sing, accompanied by great musical threads, I found myself tapping my foot and laughing at the hysterical lyrics.  Billy et al. does not take himself too seriously.  His fun is our fun and his childlike renditions are magnificent in child speak.
Billy has fun entertaining and is a breath of fresh air.  A wonderful collage of music for children, the creativity spurts like the blow hole of a whale as it surfaces and twists in total joy bounding for the sun!  Fun, fun and more fun!
The Invention of the Straw – the most absurdical creation possible and totally out of the stratosphere – is reason enough to enjoy this CD!  It’s darling.
The Family Garden, with an April 5, 2011 release, is available online at Amazon.com, cdbaby.com and thebillykellyshow.com.  As Billy himself explains, “I wanted The Family Garden to be organic, so we recorded live at the studio, with minimal overdubs.  My goal was to capture not only recordings of the songs, but also the personality of the band by having us sit in a room together, joke around as we often do, and play the music together.  The end result is just what I intended: the album has a relaxed, unaffected, ‘family’ air to it.  My daughters Jane (10) and Lily (7) even helped out, each performing one song.”  Mr. Kelly achieved his goal, for this wholesome and absurd CD captures the family fun of an evening spent with each other and friends.
The songs on the CD are as follows:
“Stefan Shepherd of Zooglobble placed Is This Some Kind of Joke? On his ‘Top Ten Kids’ Albums of 2010’ list and declared, “No joke – this is a seriously fun album.  Highly recommended.”  I quite agree!
Catch Billy Kelly and the BlahBlahBlahs on tour at:

The Family Garden will be available for purchase online at Billy Kelly Show website.
Ratings are based on a 5-star scale

We received a copy of this album for our CD review. All opinions are our own.