You are here: Home / They Read / Book Reviews & Giveaway: The Fifth Witness 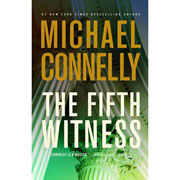 Author: Michael Connelly
Michael Connelly is the thinking man’s crime novelist. In the genre of crime novels, this is more than a gift. It requires mastery, confidence, and a demand of the reader’s attention. And that demand is what keeps us coming back, to devour novels that provide sustenance and feed the immense hunger that fills us readers with mesmerizing plot and characters that taunt like a orgasmic feast.
The Fifth Witness is the engineer’s cab on the unmanned train, careening like a speed demon down a careless track, ready to crash at any moment. The novel sustains attention as the rush proves addictive. Then it steamrolls along giving no quarter.
Mickey Haller, an astute lawyer, (and one of my favorite characters) takes on home owner bank foreclosures out of desperation. He’s working out of the back of his car – another desperate California lawyer without any clients. When he places bilingual ads in all of the local newspapers, he is swarmed with foreclosure clients. And it’s a living. One of his clients, dramatic, hysterical Lisa Trammel, is on the verge of losing her home. She forms a vigilante group, totally legal, that protests outside the bank that is foreclosing on her home. Her intent is to create a media frenzy riding on the back of the terrible economic times and the fraudulent tactics of the bank’s sale of mortgages to holding companies that use questionable tactics to throw owners out of their American dreams – their homes. Mickey gets a call. Lisa has been arrested for murder of the senior vice president of the bank, Michael Bondurant, and she needs a criminal lawyer. The holding company that foreclosed on the bank is named ALOFT and has close ties to Bondurant, whose financial affairs are discovered to be a mess. The bank has had a restraining order against Lisa for months, for she targeted Bondurant and his bank as the perpetrator of the loss of her home.
Lisa’s husband left long ago, when they got in trouble with their loan. She has a child for whom she is totally responsible, and she proclaims her innocence with a vengeance – no prosecutor deal for Lisa. Mickey does not like Lisa, but has to take the case, which will bring more media coverage than the O.J. Simpson trial. And he’s faced with The Dragon Queen of prosecutors, Margaret Freeman, who happens to be friends with Maggie, his ex-wife, who is also a prosecutor. A garden shoe and the murder weapon – both belonging to Lisa – have produced trace amounts of Bondurant’s blood. Mickey’s case is convoluted and while circumstantial, he knows DNA makes a likely bed partner to murder. However, Mickey discovers a letter in the prosecution’s discovery documents detailing Bondurant’s threat to shut down the holding company, ALOFT, for illegal foreclosure practices. Combined with Bondurant’s prevailing financial problems – he was losing millions in flip property – Mickey soars as he realizes his case has momentum.
Enter Herb Dahl from another boxcar. Lisa has signed a contract with Halley giving him all movie and media rights to her story – she has no money to pay him for her defense. Dahl steals the contract from Mickey’s car trunk and he and Lisa hook up with their own movie deal – cutting Mickey from any action. Mickey has a movie deal in his pocket, and feels enraged. Lisa flips from schizophrenic mood to mood – and Mickey feels manipulated. Then Mickey has some toughs beat him up and he and his team start feeling out ALOFT – and find it has ties to the Mafia. The owner of ALOFT, Louis Opparizio us also under Federal investigation.
As the trial begins, Mickey’s defense derails on a shaky track that cannot handle a train in the form of a prosecutor freefalling down the cross tracks. And Lisa ramps up her rage by playing to the media with her son. Mickey is torn – he despises Lisa. But he knows she is innocent, and he hates Margaret Freeman. As the motion of the trial censers back and forth his defense goes off the track – with no brake or driver in control. But Mickey keeps his head, like any good engineer.
Freeman is a brilliant prosecutor; Judge Perry defies Mickey’s contortions to create a defense, and Mickey and his team keep getting hit with new evidence and a shaky feeling that things are not as they seem. When Mickey brings to fore the NY mob and ALOFT’s shaky owner, he knows he has one more chance to get his train in control.
With intricate details on criminal law, Connelly, as always, keeps a tight rein on his plot. Mickey, Lisa, Mickey’s ex-wife, Freeman and the judge free float into a trial that keeps changing scenery. By the time Mickey realizes that he was won, he also realizes what he has lost.
Tremendous tension, unbeatable characters, a plot that screams for mercy – this novel moves into a classy courtroom and throws chaos around like confetti. Absolutely stunning, with a protagonist that combines intelligence, persistence, and diligence with a human twist of compassion that proves his undoing. This is holy ride!
The Fifth Witness

is available at Amazon.com and at bookstores everywhere.
Ratings are based on a 5-star scale