You are here: Home / They Watch / DVD Reviews: Secretariat 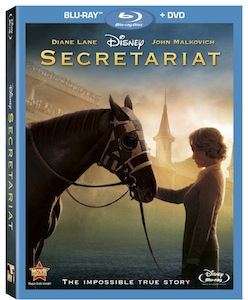 I came to this movie with great trepidation. I grew up in a racing home. My grandfather and dad both owned thoroughbreds and I grew up at the track. It was a real part of my life. My dad passed away less than four months ago, and I wasn’t certain whether the reminder of racing would trigger sadness. My son, on the other hand told me not to bother watching it. When I asked why, he said “I won’t watch anything with Diane Lane. I can’t stand her.” Hmmm…I didn’t feel the same way, especially because I equate her with “Under the Tuscan Sun” one of my favorite chick flicks.


Just as expected, Secretariat brought back a flood of memories, but contrary to what I thought..it was a good thing.  The story begins as that of an ordinary housewife who inherited a horse farm after her father’s death. Struggling to save the farm against all odds, we follow Penny Chenery Tweedy (played by Diane Lane) as she does everything in her power to keep the family farm solvent. When she realizes that she has a remarkable horse (Big Red), the story of how she held on to  “Red” (who later was named Secretariat) and saved the farm is a fairy tale come true. Talking the retired Lucien Laurin (John Malkovich) into returning to horse training, the movie fictionalizes the way that Laurin actually came to work for Chenery (his son actually worked for Meadow Stable as a trainer as well).

I didn’t seem to mind these discrepancies, as the shots of Ron Turcotte, played by REAL LIFE jockey Otto Thorwarth riding this magnificent animal, silks blazing as the horses thundered around the track were awe inspiring.

A great film for families, horse lovers or anyone who just wants to see a WINNER of a movie.

Secretariat: Heart of a Champion – I LOVED this feature. Hearing the REAL Penny Chenery and watching the actual Secretariat race was such a joy.  With input from the exercise rider, and others who worked with this amazing horse, this is a feature NOT to be missed.


Deleted Scenes – I would have liked to see “Memories” kept in the original movie. Generally the deleted scenes are delted for a good reason. I actually found all 3 of these to look as though they would have added to the film.

Music Video – Was very cute, although I’m not a huge fan of Music Videos.

is available at stores nationwide.