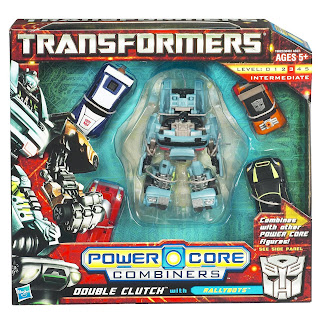 Hasbro holds so many new ideas this year in its well spread hands, that it is hard to find favorites!  I especially love the new line of “vintage’ Hasbro, the original toys come back to life, like in Toy Story 3!  Hasbro has reintroduced Transformers Power Core Combiners Double Clutch with Rally Bots into its 2010 winter line.

From the Hasbro website:  “Thought lost long ago, Power Core Combination has recently been rediscovered on Earth. It creates a new breed of powerful AUTOBOT warriors to destroy the DECEPTIONS!” 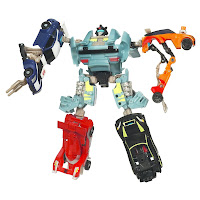 DOUBLE CLUTCH has always been a master of diversionary tactics!  His entire team is built around the idea of confusing and disrupting DECEPTION operations.  …Power up for the ultimate robot battles!”
The MINI-CONS (sold separately) attach to any Commander figure, and your child (or you!) can drone off to battle with extra components – and gain on the enemy!
Once again, Hasbro has done the job!  I love the re-introduction of some of the original Hasbro ideas, as my children and grandchildren grew up – and continue to play – with Hasbro toys!
Transformers Combiners 5PK – Rallybots Double Clutch

are available at toy stores around the country.
Review by Broad “A” – Ava
We received product for this review, however all opinions are strictly our own.
« Beauty Reviews: Skin MD Natural Shielding Lotion
Book Reviews & Giveaway: An Object of Beauty »