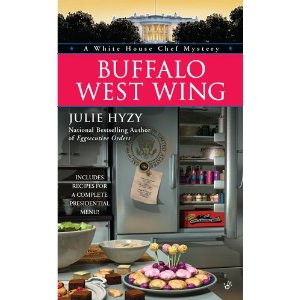 Author: Julie Hyzy
A new president and first lady and their children, Abigail, 13 and Josh, 8 present themselves to the staff on moving in day.  President and Mrs. Hyden and the First Children are an unknown to Executive Chef Olivia (Ollie) Paras and she appears a little worried about the transition – ex-president Brennan and his wife had adored Ollie and her staff.  Now there is a new First Lady in the House – and Ollie wants to make sure that they are pleased – her beloved job depends upon it.
When a mysterious box of chicken wings appears in Ollie’s kitchen on moving day, Ollie doesn’t know what to do.   Her job is to approve of all foods remitted to the President and his family for obvious safety reasons, and she has no idea of where the wings came from.  In the flurry of the Secret Service contingent she puts the wings into the refrigerator in the back of the kitchen until she can alert the SS of their existence.  Suddenly, however, little Josh has appeared in the kitchen with his sister Abigail and finds the tasty stash.  Ollie has to say no to Josh, and Mrs. Hyden is not pleased.
Before the Secret Service can test the wings, Chef’s Assistant to Ollie, Cyan, misappropriates the wings to the laundry room downstairs, as a treat.  Ollie is appalled and scared for Cyan – protocol is not to be ignored in the White House and Cyan has made a huge mistake.  When all the laundry room personnel who have eaten the wings end up in the hospital, Cyan fears for her job.  The wings are poisoned.  And the hospital is under siege by Amustran terrorists, who hold the sick White House staffers hostage.  Cyan and Ollie don’t know if they will live and Cyan is beyond herself with remorse.
And to top it all off, the SS can’t let the President and his wife know that their children had almost been poisoned for security reasons.  Ollie is off on the wrong foot, and it only gets worse.  Mrs. Hyden decides to bring in the First Family’s personal chef, a whiny creep named Virgil Ballantine.  The backstabbing Virgil does everything in his power to sabotage Ollie’s job – he wants to be Executive Chef – Ollie’s job.
This funny, poignant, rollicking, intrepid ride moves along like a roller coaster.  Cute, irreverent with lots of love interests among the White House staff and the Secret Service cuties, Ollie ends up saving the day when Agent Gav and she save Josh from certain death.
If you love a good quick flowing mystery with a touch of class and the breakage of glass, some great recipes and lots of seasonings and punched with flavor, Buffalo West Wing is the book to pick up!
Buffalo West Wing (A White House Chef Mystery)

is available for purchase at bookstores beginning January 4, 2011 or on pre-order from Amazon.com