You are here: Home / Fun / DVD Reviews: The Human Centipede 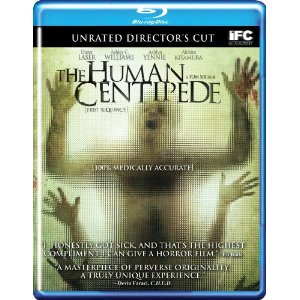 To counteract the vomit sitting in my mouth due to this film I am rocking out to Beyonce for some reason.

Ok… here goes.  This starts as any horror film would, girls on vacation in Europe get stranded and abducted by a crazy doctor.  Very standard fare for films like this. And at this point I am still with the film because plenty of awesome films start this way (Hostle the best of the bunch).  The evil doctor then explains to his captives that they will be attached ass to mouth. They then are attached ass to mouth and that’s about it folks.
This film was more nonsensical than the plot of Avatar and had worse acting than Troll 2.  And in fact the gore of the film was kind of light. After the initial shock of this concept, the viewer is just left with a little nose in ass crack the rest is covered up by a cloth or tissues.

What kept me from turning the film off is the villain.  He was genuinely terrifying.  His acting was amazing compared to the rest of the cast.  While there was no pathos in his character he did play it to the fullest extent.

I could have dealt much better with the film if the script was improved a bit.  The movie is only made to shock and it leaves no lasting effect. The viewer doesn’t depart The Human Centipede pondering what they just saw. Sometimes I am more shocked by episodes of Law and Order.  We are not concerned regarding the characters. By the end I wasn’t even all that disgusted.  When the credits hit I just said f*ck it and turned the TV off.  It just was not worth it.

Audio Commentary:  Sorry public I just did not care enough to watch it.

Behind the Scenes: Meh…just a bunch of raw footage.

Over all this film was completely pointless.

is available at Amazon.com and most DVD retailers.