You are here: Home / They Watch / DVD Reviews: Glee: The Complete First Season 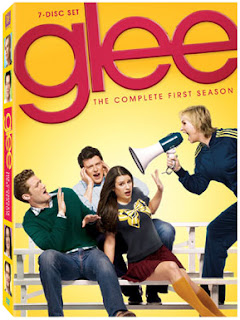 Find your voice. Stomp that yard. All that crap.

There was no glee club growing up in my suburban hideaway. There was a drama club that I would have reason to believe was similar. I was too busy getting (sorry mom) stoned and listening to Otis Redding records (originals). Staying after school reenacting any musical that involved sounding like Olivia Newton-John (heh well get back to this one) was outside of my playbook. But this program is nothing like the drama club at Barrington High.

I missed Glee the first few weeks that it was on, last year while wrapping up Lost I became a bit well…Lost. And I was very hesitant. I seriously despise musicals (just the crappy, I’m looking at you Phantom of the Opera, ones), and if this show were anything like an Andrew Lloyd Webber production I would have hung myself with the piano strings.

The first episode that I caught was the deal breaker and an accident, but I was hooked by Kurt’s singing of Single Ladies, and when I mean hooked, I mean I was attending Gleek High. I am fully convinced that this is the best program on TV right now (I have yet to see Boardwalk Empire). Glee is a perfect escape.

Time for a synopsis!!!!
At the heart of the show is Will Schuester, a passionate Spanish teacher at McKinley High. Will takes over the school’s feeble glee club out of reminiscence, as he himself was a glee star at McKinley of yesteryear. He faces frequent problems in his attempt to refurbish the club to its former glory, which principal problem is that no one wants to join. A more urgent distress is a challenge delivered by financially conservative Principal Figgins: the club must place at a regional competition or get all their funding cut. Sue Sylvester, the
cheerleading coach (the school is known for their cheerleaders), is determined to make glee go away so her already inflated budget can go up.

Glee is perfect. Every one of the cast members is a triple threat (they can all sing, dance, and act). Sure they are all playing about 10 years out of their age range but the hell with that they look young enough. It is nice to see a group of diverse young actors (the show would call it “the saddest Benetton ad ever”). All of the characters seem cliché but as the show goes on we see them transcend into the Breakfast Club multidimensional young adults that the viewer can relate to.

All of the music is fu*cking brilliant. Yes, I said it. The music always ironic or thematic or satirical just fits perfectly. The Kiss vs. Lady Gaga episode is brilliant. And even better the show is shot on film not digital and the blu-ray shows this off.

This show is much more than the Musical version of Degrassi that I had originally pegged it for. This is the rebirth of network television. Glee is entertaining humorous, and stylishly written; the cast is
relate-able and effortless and the musical sequences will have you singing alongside your coffee table, using the clicker as a mic.

is available for purchase on Amazon.com and other fine DVD retailers.


Ratings are based on a 5-star scale.