You are here: Home / They Watch / DVD Reviews: America the Story of Us 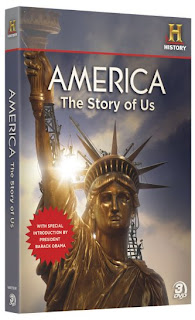 America: The Story of Us

The History Channel
Comprehensive, large, all-encompassing – America: The Story of Us held me spellbound for 9 hours.  How to review a DVD that offers America up to the palm of our hands, scrutinizing not only the brave events but also the deplorable ones?  Definitely a challenge, History Channel!

I remember as a kid growing up in Izmir, Turkey how frustrated I felt with the arrogance with which we Americans in the country treated the Turks.  We were uninvited, unwanted and I walked around carrying “The Ugly American” under my 9 year old arms.

Of course that impression changed as I grew older.  Watching America: The Story of Us brought a sense of the splendor, courage and unflinching spirit that carries the American Dream – freedom and equality for all.  Barack Obama opens the semi-documentary-mini-series and various people remark on events as they are portrayed:  Michael Douglas, Tom Brokaw, Donald Trump, Sheryl Crow, Sean P. “Diddy” Combs, Tim Gunn.  The excitement and drama of the re-enactments proved superb watching and the documentary moves at flash frame speed.  The same attributes that create a “movie-feel” instead of a “documentary feel” are what create problems.  There is a stylized marketing in the array of fast vignettes that feels somewhat like a Sundance short film clip or a foreign film festival artsyness that detracts at times from the free flow of information.
From 1600’s settlers to the war with England, sweeping through the Civil War, Americans heading to the gold rush westward, the ignominy of the reservation as a solution to dispose of the Native American Indians, the Erie Canal, the buffalo, skyscrapers, the Model-T, the Depression, WW II, the Cold War, 9/11:  these are just the tip of the iceburg covered in America: The Story of Us.
The DVD’s episodes are as follows: 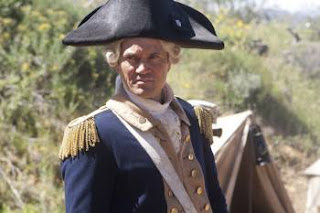 LOVED:
The constant series of enactments that create America: A Story of Us provides not only historical information that we have not been privy to before, but is so entertaining that I couldn’t take my eyes off the presentation for one minute.  Important but little known events that are not usually covered in a documentary create a “we are there” environment that suffuses the documentary with compelling drama.  The acting and mini-series effects create a moving visual experience.  The magnitude of the series – documenting the history of the U.S. from 1600 to the present is a huge endeavor; however, it works beautifully in this movie like setting.  Each vignette, while presenting information, catches our imagination and breath with such an emotional impact that it is hard to stop at any point!
Exhilarating and sweeping, the “pioneer spirit” that drives the U.S. is captured time and again by the History Channel in this debut.
Not So Much:
I found the various commentaries annoying, with a “talking heads” like interruption.  Michael Douglas stuttered; Donald Trump’s hair is annoying; Sheryl Crow spoke but said nothing, etc.  I truly enjoyed the introduction by Barack Obama, but felt the injection of the profiled actors, actresses, Wikepedia creator, and “Diddy” a little much.  I also would have preferred to have seen more coverage on WW I and the fact that the Korean War – in which 39,000 young American soldiers died – was left out saddened me.  I think that more HISTORY and less commentary would have actually enhanced this collection.
That said, America: The Story of Us is one of the best documentaries I have ever seen.
Extras: (Extra bonus coverage at the end of each disc)
The Revolution, the Declaration of Independence, George Washington, Civil War, Transcontinental Railroad, Statue of Liberty and the Model T Ford provided a great glimpse of further information; again, I would have preferred coverage on other important points in the narrative itself.
Overall Presentation:
Epic and breathtaking in its coverage of average people who helped create and govern a great country, this DVD shows intricate and immense changes with an intimate gaze.  Definitely a winner, I kept my eye on the screen and learned much that I had not really seen before.  Well done and epic, an outstanding job by the History Channel at reveling our great moments while contemplating our mistakes and errors, this well balanced film made me think and ponder our role in the creation of this country.  Amazingly entertaining and the photography is sublime!
America: The Story of Us

is available for purchase from Amazon.com and other fine movie retailers.
Ratings are based on a 5-star scale
Overall: 4.5
Review by Broad “A” – Ava
We received a copy of this DVD collection for this review, all opinions on the product are strictly our own.
« Book Reviews: Scar Tissue
Book Reviews & Giveaway: The Postcard Killers »