You are here: Home / They Read / Book Reviews: Death Notice 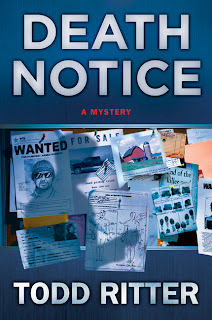 Death Notice stuns…then stuns again.  This novel begins like a riptide and keeps on moving at a pace that tasers through page after page of enthralling small town deception, mystery and secrets.

Perry Hollow, Pennsylvania, a sleepy little town that holds a myriad of secrets in its slumber some townspeople, is home to Kat Campbell, Chief of Police, and her Downs Syndrome son, James.  There has never been a murder in the town’s history.  When a mysterious coffin finds itself laying on a ditch, its opening portends nightmares for the townspeople and Kat.  Inside lays George Winnick, a 60 year old farmer.  His lips stitched closed, George Winnick has been partially embalmed.

Henry Goll, called Henry Ghoul by co-workers because of a massive scar and burn on his face, is the obituary writer for the Perry Hollow Gazette.  He receives a fax – a death notice for George Winnick that precedes the death by an hour.  And Henry holds his own nightmares close to his chest.  Once a top notch reporter in Pittsburgh, Henry runs to Perry Hollow – to hide from himself.

A task force, formed by the PA Bureau of Investigation, introduces Nick Connelly into the mix.  Another man with a secret, Nick realizes that this killer’s MO portrays a serial killer that he has been seeking.  The serial killer’s name is the Betsey Ross Killer.

Martin Swan, the publisher of the Perry Hollow Gazette, becomes furious when he hears at Kat’s press conference that Henry received advance notice via fax of the killing – while at work at Martin’s newspaper and Henry didn’t give him the scoop.  Martin and Henry are already confrontational, and their relationship heats up.

Deanna Swan, Martin’s sister, who works as a receptionist at the town’s mortuary, falls for Henry.  Martin steadfastly disapproves.

Art McNeil, the eerie owner of McNeil Funeral Home, slices his own throat at a funeral.  Bob McNeil, his son, shows Kat and Nick how to embalm.  The local bad guy, Lucas Thatcher, who charges people to bury them alive in the cemetery, is another suspect.

As the characters play switch and bait, the fax machine in Henry’s office rolls.  Henry receives another fax.  Tony Gunzelman, the high school’s football hero, rests inside a coffin bobbing on the lake.  The killer has sent the fax and Kat, in a frantic attempt to save his life, cannot find Tony in time.  The third fax rolls off of Henry’s fax machine – and names Kat’s son James as the third victim.

As Kat frenetically tries to save her town and her son, with Henry and Nick’s help, chaos and fear run rampant.

This thriller presents a cast of characters that touch our hearts.  Amidst the horrendous murders, Henry resolves his past and Nick reveals his.  Kat remains front and foremost, the protector of her town and her son.

Then ending reveals the missing slices of the pie, and Perry Hollow will never be the same – even after the killer is found as his last victim – Henry – struggles to stay alive.

Walking a tightrope, Todd Ritter’s debut novel never loses a foothold.  Paced, tense and surprising, Death Notice upholds the best that a crime writer can deliver.  His characterizations thrill as each characters transforms and roils toward the ending.  This novel cannot be missed.  Stunning.

is available for purchase at Amazon.com and other fine book dealers.

« CD Reviews: A Mind of My Own
DVD Giveaways: Chitty Chitty Bang Bang »