You are here: Home / They Watch / DVD Reviews: Marmaduke 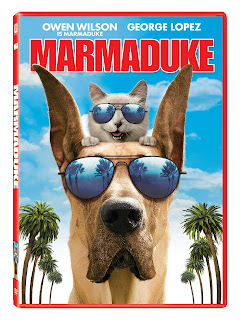 I just dare you not to LOVE this big, sensitive talking Great Dane!  From Twentieth Century Fox, this film is too laughable to pass up!
With Owen Wilson as Marmaduke, and George Lopez as his partner in crime cat, Carlos, this film rocks.  Marmaduke lives in Kansas with Debbie and Phil and their three kids, Brian (around 7), Barbara (teenager, comes with cell phone) and Sara the 2 year old (and, of course, Carlos the Cat).  Phil gets a great offer from Bark Organics, a natural dog food company trying to get into Petco.  They hire Phil to market the product and the entire family moves to “The O.C.” as Marmaduke calls it, as he watches Seth and the crew on the O.C.  (I.E., California) – Hysterical!
When they arrive in CA, Marmaduke and Phil head to the park to meet Phil’s new boss, the head of Bark Organics, who also owns the Queen of the Park, Jezebel the Collie.  The park dynamics are this:  Boscoe the rottweiler owns the park, and Jezebel is his beloved.  Boscoe will not allow Marmaduke or Maizie, Marmaduke’s new friend,  to enter his zone:  it is Pedigreed Only.  As Boscoe and Marmaduke, Maizie and Jezebel and the park dogs fight over dominion, Phil gets lost as well as Marmaduke.  While Marmaduke sells his mutt friends down the river to acquire the love of Jezebel, Phil ignores Brian’s love for skateboarding and enrolls him into soccer.   He refuses to listen to Barbara, who is in teenage angst over moving.  Debbie watches with horror as Phil becomes an overworked groupie for his boss.  Finally, when Phil sends Marmaduke out to sleep in the backyard because Marmaduke and his friends have trashed the house, Marmaduke runs away.  Thanks to Chupadogra Buster, who gives Marmaduke good advice on the life of a runaway, Marmaduke tries to find his way home.  Add in a water main break, Marmaduke and Maizie falling into the crater and almost being washed away, and Phil’s epiphany that his dog is part of his family, and you get the main drift.  What makes this movie exciting and fun are not only the theatrics but the funny one-liners, the adult humor entwined around good clean fun for the kids, and just an amazing movie starring a giant Marley.  Great show, bring the popcorn! 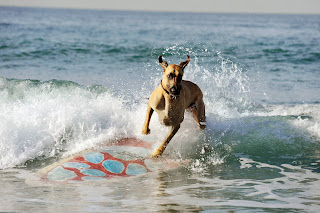 is available for purchase on DVD or Blu-Ray

at Amazon.com and from your local DVD dealer.
Ratings are based on a 5-star scale
Overall: 4
Review by Broad “A” – Ava
We were provided a copy of this movie for our DVD review. We were in no way compensated and all opinions are strictly our own.
« Health & Beauty Reviews: NutraSea+D
Giveaways: Goosebumps DVDs »