You are here: Home / They Watch / DVD Reviews: Vincere 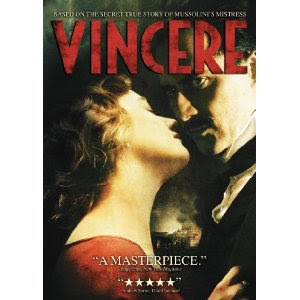 Why some women throw themselves at men is a mystery to me.

“Vincere” (Win) is the story of the mistress of Benito Mussolini, Ida Dalser (Giovanna Mezzogiorno). Filmed in art-house style, this new film, has the feeling like it was made in the late 1920’s.Melodramatic and dark, “Vincere” takes us hopping around the rise of Mussolini and the fall of Dasler in a film that seems to start by skipping back and forth between a seven year span.

Mussolini (Filippo Timi) challenges God to strike him down within 5 minutes, as the movie opens. With Ida watching from the shadows, she is immediately taken by this FORCE of a man, and falls madly in love.We get the feeling right from the beginning that Mussolini cares less for this woman and more about his rise to power, while Ida throws her money and soul at him in an attempt to be loved.


History suspects (and this movie states) that Dalser was not only Mussolini’s mistress, but his first wife as well, although there has been no proof of that. His treatment of Dasler and their son Benito Albino Mussolini (Fabrizio Costella) is nothing short of tragic.

While certain historical events are highlighted, the socio-economic differences in their backgrounds is ignored. Tragic and dark, “Vincere” brings to light the treatment of Dasler, by Mussolini, as he had her locked up in a mental institution and sent their son away.

The art-house style that the director used in this film, gives the viewer a real sense of time. The darkness of the film is uncomfortable, but considering the subject matter – appropriate. Mezzogiono and Timi give incredibly passionate and convincing performances.

While this was not an easy film to watch, Bellocchio (the director) does provide us with a film cut with old newsreel footage, powerful and steamy scenes and a tragic story. I only wish it weren’t quite as visually dark.

is available for sale at Amazon.com and other DVD retailers.

Thank you to IFC films for providing this title for our DVD review. We were in no way compensated and all opinions are strictly our own.