You are here: Home / They Watch / DVD Reviews: James and the Giant Peach 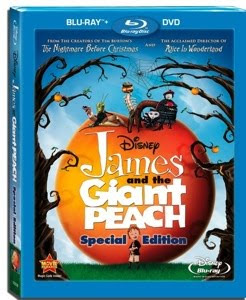 I genuinely don’t remember this film from my childhood although I was 13 when the film came out so I was out of the child Disney stage. I definitely saw the film, maybe in school, I digress kind of. What kind of school would show this film it has absolutely no educational value? OK, rant over, and time for the synopsis, yeah!


James (the Freddy Highmore of the 90s), loses his parents to a rampaging storm and is sent to live with his loathsome aunts, Spiker and Sponge. James leads a miserable life at the beck and call of his aunts. But all that changes when a mystifying old man gives the boy a bag of charmed crocodile tongues. While returning home with his extraordinary gift, James trips and unintentionally spills the tongues near an old peach tree. He discovers that one of the peaches has grown to a colossal mass. James eats a handful of the squishy fruit and climbs into a tunnel that appears on its side. He meets a ragtag crew of man-sized insects inside — a grasshopper, a centipede, a ladybug (Jane Leeves), a worm (David Thewlis), an old glowworm (Miriam Margolyes), and a kind spider (Susan Sarandon) — and soon finds himself on an expedition to New York City, with all kinds of crazy adventures on the way.

This film was just alright (I was definitely not as blown away as I thought that I’d be).  It did not always keep my attention, and it was too dark (the first time I have ever said that), especially for a children’s film. There were very few moments of hope in the film. I also don’t remember the book having music. I thought that the  musical nature of the film kind of sucked. I was only a fan of one of the songs this was nowhere near as good as Randy Newman’s previous music for Toy Story (a better all around production). I felt like most of the characters were one dimensional and only served one purpose.

I really only felt a connection with two of the characters: the spider and the grasshopper. These two were the only ones with any depth and complexities. The design of the stop motion world was fantastic, but this is what the director (Selick) really excels at. Did you see Coraline? This was an obvious building block in his visual design.

Unfortunately there was only one special feature a game that was not really age appropriate for me.

I only had one more problem with the film. The digital transfer was very weak. The grain is ever-present. While the film is probably faithful to the original stock it certainly could have been presented better.

All in all I enjoyed the reviewing but I do not think that I would watch this film again for a while.

Ratings are based on a 5-star scale
Overall: Three peaches out of five