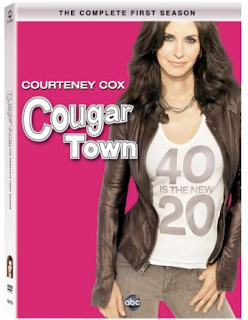 I just finished watching Cougar Town: The Complete First Season, the ABC comedy by Coquette (Cox/Arquette).  Episode to episode zipped like a silver bullet, crashed onto the screen and flashed me, leaving me sentimental, hysterical and wishing that Jules, Bobby, Travis, Andy, Baby Stan, Ellie, Laurie, Kylie, Greyson (NOT TOM!), and Barb were my new best Friends!  Hilarious episodes tramp onwards, one after another, in this comedy hybrid:  part Seinfeld, a touch of Friends, semi-Sex in The City with a b@@ch slap, I couldn’t put it on PAUSE – even once!  Clem had to hold his urge to pee, as I wouldn’t stop watching to walk him!  But he was as mesmerized by Bobby’s mastiff Travis as I was!

This DVD ricochets right into the stratosphere as we give it our hearts.

Jules, a 40 year old divorcee whose ex-husband is always hanging out with her and their eighteen year old son Traivs who is clueless about girls starts the rollcall of the series.  Andy and Ellie are Jules’ neighbors, and Ellie is Jules BFF.  Their relationship slides against Greyson, Jules’ across the street nasty neighbor who only is her age and just divorced – and only dates young bimbos.  Colliding into the mix comes Laurie, a blonde bombshell who works for Jules in her real estate business.  Then comes Barb, older woman turned stalker of Jules and her dates.  The cast of characters constantly startle and entrance as they discuss sex, botox, love, parenting and every stereotypical topic under the sun, turning each cliche into hysteria. The Black Friday Shopping Trip proved so funny that it had me wanting to shoplift along with Jules – it looked like so much fun!  Jules’ first Thanksgiving dinner when she discovers Travis is going to sleep with girlfriend Kylie brings down the house. 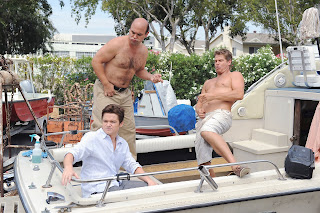 Artsy, avant garde, and so homey you want to marry well endowed Andy and take Bobby home as a pet, this series proves the agility of the Cox-Arquette magic as they produce one crazy episode after another.  I Love Lucy slapstick – Seinfeld innuendo and Scrubs farce creates a bastion of fun so entertaining that I watched several episodes twice. And each episode pivots around dysfunctional, codependent Jules as she over loves her family and friends – and us!  Season One ends with Greyson and Jules realizing that best friends make the best lovers – I excitedly await Season Two!

I am not a TV watcher.  I haven’t turned on my set for 6 months.  But when Lisa Kudrow plays the evil dermatologist and strikes Jules’ and Ellie’s brows with a needle full of botox – and then ends up in bed
with Bobby – I morphed into a huge fan of Cougar Town.  Its irreverence and camaraderie captured me and I couldn’t fight it!  To see this series develop and fine tune episode after episode is the most fun I’ve had in years.  A dark horse that gallops into the Winners Circle.

was created by Bill Lawrence (creator of Scrubs) and Kevin Biegel and stars Courteney Cox as Jules, Christa Miller, Busy Philipps, Dan Byrd, Josh Hopkins, Ian Gomez, and Brian Van Holt and is priced at39.99.  It runs for 552 minutes (24 thirty minute episodes) and is distributed by The Walt Disney Studios Home Entertainment. 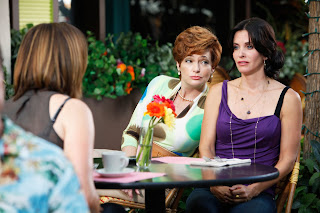 In Taming Cougar Town, Bill and David Arquette explain the premise of Cougar Town:  what it means to age for a single woman of forty.  The setting, Florida, is intentional – both Bill and David agree that it is different from LA or NY and lends an auspicious tone to Cougar Town.  Courtney Cox was the inspiration for the film and one of the scenes shows her looking at her fat stomach – this came from Bill’s wife jumping out of the shower and saying SHIT when she took her towel off – and Cox actually allows her own body to show her fat.  The dysfunctional family Friends approach works says Arquette because of Cox.

Ask Barb is hysterical once again.  Barb is a real cougar, an older woman in the series who stalks Jules to get her young dates.  Humor runs rampant!


Live with Jimmy Kimmel is the crown jewel!  Funnier than anything I have ever seen, Kimmel shows his stuff!


This is a HAVE TO HAVE DVD for the ladies – and just as much, for the men!

is available for purchase from Amazon.com and other DVD retailers nationwide.

Thank you to Walt Disney Home Entertainment for providing a copy for our DVD review. We were in no way compensated and all opinions are strictly our own.