You are here: Home / They Watch / DVD Review: The Art of the Steal 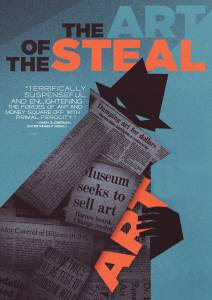 The interesting thing about documentaries is that you either LOVE ’em or HATE ’em. There’s just no middle ground. I suppose that the appeal comes from either a passion that you (or the director) has about the project. Watching a documentary about a subject that you care nothing about is USELESS.

happens to be one of those documentaries that had an IMMEDIATE attraction for me. I was pulled in by the director’s passion and found that by the end of this film, I was just as passionate and enraged as the director and all of the key players were.

To backtrack a bit, this documentary is about the Barnes Foundation, which housed the world’s largest collection of impressionist and post-impressionist paintings in the world. Sought after by museums including the Louvre and other large museums, the Barnes Foundation was the PERSONAL  COLLECTION of Albert Barnes and was set-up as a school in Marion, PA. Barnes specifically wanted his collection to stay housed in his school, never be loaned or sold.

is the story of what happened after Barnes’ death. With an iron-clad will that would protect the collection you’d think that this massive collection of art would have been protected. This film shows how the government (city and state) was able to STEAL the collection from the Barnes Foundation as well as the fight that ensued along the way.


This film touched me so much that I became a member of the Friends of the Barnes Foundation. There’s a great deal of information on that site about saving the foundation as Barnes had dictated in his will.

Overall: 5 (but I’m sure that you could have guessed that)

Thank you to IFC for providing a DVD for this review. We were in no way compensated and all opinions are strictly our own.

« DVD Reviews: The Girl by the Lake
Book Reviews: Scent of the Missing »