You are here: Home / They Read / Book Reviews & Giveaway: City of Veils 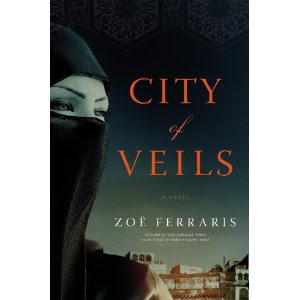 City of Veils: A Novel

“City of Veils” is a novel to cherish.  The blatant and inhumane conditions that weave Saudi women, and women visiting from any country, into a black cloak, veil and burqa to cover their bodies proves untenable.  Their men remain hidden too, behind the veil.  That’s the tip of the iceberg.  Like the Titanic, women freeze and implode in Saudi’s heat and all their rights pivot around a patriarchal and misogynistic country that adheres to only one role regarding women.  Saudi women carry a silent invisibility that defies any humanity and reason.  What Ferraris reveals is that the men are veiled also by their limitations within their faith and the dictates regarding their women.

However, don’t be deceived.  “City of Veils” secretes its own nuances into the void, the ambivalences and intrigue that the town of Jeddah pivots around.  Here we meet Leila, a young Jeddah woman of good family brutally tortured and murdered.  Leila defies her family and roams throughout the alleyways of Jeddah, filming the unfilmable:  prostitutes, summer marriages, religious police brutality to women – and the discrepancies in an ancient Quranic text of the Quran.  The documents are the reason for her murder, as the Muslim belief that only one interpretation of the Quran exists, as it is Allah’s own words.  Finding and revealing documents that reveal another interpretation – ancient documents – scorns basic Islamic religious reality.  The novel fills with the cracks in the Quranic texts – Nayir, Osama, and Katya contain the same fault lines.

Thrown together through Leila’s murder, Katya, one of the few women who works in the medical examiner’s office, Nayir, a man who loves Katya but is too devout to accept her unorthodox job, and Miriam Walker, an American woman whose husband Eric has disappeared, align themselves to find the murderer.  Miriam’s husband Eric is a prime suspect.  Katya has been asked by Osama, the lead investigator, to assist him in the investigation.  Osama needs a woman to interview the hidden world behind the burqa in order to find the killer.  Osama reports to Chief Riyadh, who wants the case resolved quickly to keep it out of the media.  As Katya, Osama, Nayir and Miriam are engulfed in the dark side of Jeddah, they realize their answers lie in the desert with a dark and dangerous man named Apollo Mabus.  As the novel whirls into and around the vast sand dunes that mirror the veil, Zoe Ferraris exhibits her brilliance in presenting a complex culture laced with ambivalence, violence, and dark and light religious overtones.  Like “Finding Nouf”, her first award winning novel, “City of Veils” reveals an insight into what happens when a culture is so divided that it becomes its own parody of Heaven and Hell.

Exquisite, fragile and strong, we watch as Katya demands justice for Leila, Miriam reveals her inner strength, Nayir realizes the dichotomy of his religious beliefs, and Osama enters the desert and returns intact.  Brilliant; succulent as the scent of jasmine in its fiery depiction of Muslim aggression and tenderness and fine tuned as Susan Howatch or Dan Brown in its religious complexities, “City of Veils” astounds with its perfect performance.

City of Veils: A Novel

is available for purchase at Amazon.com and other fine book retailers.

Ratings are based on a 5-star scale:

Thank you to Hachette Books for providing a copy for this book review. We were in no way compensated for this post and all opinions are strictly our own.