You are here: Home / They Watch / DVD Reviews: Stolen 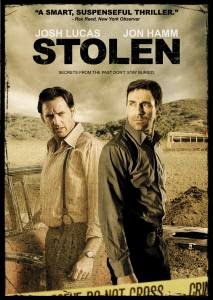 Before watching this film I believed that there were just two types of murder mysteries – good and bad. After watching this one I realize that this may walk the line. This is oil in the water of mystery films, some scenes stick and others feel out of place. I probably would have absolutely hated the film but I have been watching a lot of Law & Order: Special Victims Unit lately. Thinking back the film feels like a very high “made for T.V.” production rather than a Sundance selection.

That being said I actually enjoyed the film.

I was just twiddling my thumbs and just wrote a synopsis:

Tom Adkins (Hamm), detective who feels guilty about not being able tosolve the case of his 10-year-old son, who was abducted eight yearsprior from a 1950s-style diner. He holds out hope that his son isstill alive. When a boy’s body is found in a box, buried beneath aconstruction site, they think they have an answer. Alas, forensic evidence concludes the boy in the box died in the late 1950s. The film flashes between the present and the 1950s, where we’re introduced to the narrative’s second dad. Matthew Wakefield (Lucas), a mid-century, single father. The down on his luck construction worker has lost his home in foreclosure (wow, they’re just like us…this is crap but whatever). He drops two of his three children off at his in-laws; they won’t take the third because he has an extra chromosome. Obviously, this is our ill-fated box boy. Meanwhile, in the present, Tom’s marriage unravels, even as he gets closer to finding the killer of
both boys.

The film is all a bit obvious and there are no points in which I felt surprised at what is going to happen. If you as a viewer can’t figure out whom the killer is by the midpoint in the film I just don’t know if you have ever seen a mystery film.

The style of filming in the flashbacks is a bid heavy handed. All of the footage is washed out which was intentional, not just due to the poor film quality. The director could have kept the same color scheme without the washout and achieved the same effect.

The acting was actually good for the material. Both of our male leads do well with what they have. They both brood very well. Hamm looks and acts like a depressed vacant man much like his Mad Men character. Lucas really sells himself as a poor working sap.

The film definition of the film is o,k it does look grainy at times and the high quality is lost during all of the flashback due to the washout. At other times the film quality is fantastic, and the sound quality here is pretty good. While it is nothing fancy, it is all just pretty good.


Behind the Scenes: This is just a few minutes of the actors talking about how good the movie is and how much fun it was to make. Just general promo reel stuff.

Oh, and a trailer too. – Overall, it’s an easy watch, not too demanding on the viewer and never breaking new ground. This will be a fantastic watch on Lifetime at 2 A.M. when you can’t sleep. I did not mind that all that it was underwhelming.

is available for purchase at Amazon.com on Blu-Ray  or DVD

and at other DVD retailers.

Thank you to IFC films for providing this title for out Blu-Ray review. We were in no way compensated for this post and all opinions are strictly our own.