You are here: Home / They Watch / DVD Reviews: Ladybugs 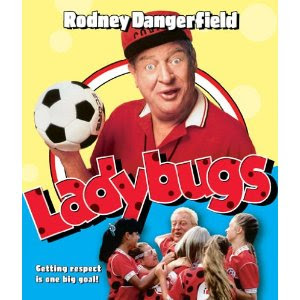 I really wanted to put a lot of thought into this review, considering this was one of my favorite films when I was just a wee little boy of nine. I was not exactly sure how to approach the film. Should I see it as a reflection of all the films of my youth, or review it as an adult nostalgic for a simpler era of film. So I say “the heck with it,” I can smash two styles of critical analysis together because I can lie and say I don’t know any better or WWRDD (What would Rodney Dangerfield do?).

First, I would like to ask my Mother what the effing h*ll was she thinking taking me to this film at such an early age?. I’m just really happy that I did not show this film to the future wife’s little sister as planned because it would have been awkward. That being said, I still really enjoy this film. When  I checked out the credits, I realized that the director of this film directed my single favorite Vietnam film (The Boys of Company C). Maybe this is why I enjoyed this film. Then I noticed the plethora of straight to home video action/war films he had made and realized that these two films were just flukes.

I usually hate clone films such as this, but for some reason this film works and works well. This is just a clone of The Bad News Bears. This is a classic teen sports film just because of the three performances of Dangerfield, Brandice, and Jackee. It was a classic “respect” performance of Dangerfield’s. While on his quest for “respect” Dangerfield and Jackee both rattle off 100 innuendos about “balls” or being hit in them. Certainly, it was very toned down Dangerfield, but it was still funny and a bit risky for the audience. Jonathan Brandis does an absolutely great job with the gender bouncing between Matthew and Martha. He looks, but does not sound like a girl which was half the fun.

The end of the film has all the clichés that are required in a teen sports comedy. Full of whole-hearted messages that are in most filmw for that age group, such as anyone can do it if they try, etc. Usually all of this would completely turn me off, but not here.

was a part of my youth that I will defend forever along the likes of Monster Squad and Ernest Goes to Camp. I know these films are not great or even remotely works of art, but they are a part of my childhood. That carries a lot of weight for me.

The blu-ray quality was subpar in video definition and audio but on a film like this that does not really matter. There are no special features to be found on the disc, which kind of stinks but the movie is the real treasure.

is available on Amazon.com for only $11.49, or at your local DVD retailer.

Ratings are based on a 5-star scale
3.5 ounces of respect out of 5

Thank you to Lionsgate Films for providing a screener for this DVD review. We were in no way compensated and all opinions are strictly our own.