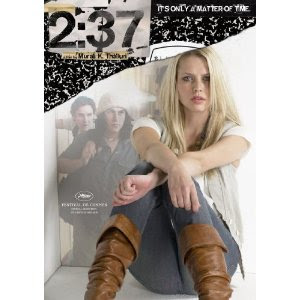 Somehow I remember my teenage years very different than what must be going on today. 2:37 is based on a real suicide note that director Murali K. Thalluri received from a friend, that included some of the most horrific things he had ever heard about high school students. This first time film, made by the then 20 year old director is a very real, yet disturbing chain of events in the day of some Australian teenagers.

This is one of those films that give the perspective of each of the students, who are each undergoing incredible personal problems and angst and intertwines in the culmination of an extremely graphic suicide.

The film bounces between the viewer being able to watch the scenes as they take place, and then cuts to very personal interviews of the characters, where they really give their personal thoughts on their lives.

This heartbreaking film, really cuts to the core of the loneliness and isolation that so many young people feel. Be warned that this is EXTREMELY GRAPHIC and as a result quite disturbing. You spend the entire movie trying to figure out WHICH of the cast of characters commits suicide.

This first (and I think only) film by Thallari is a powerful one, I only hope that he offers us more films like this in the future.

is available for purchase from Amazon.com and other DVD retailers.

Ratings are based on a 5-star scale
Overall: 5 stars

Thank you to IFC for providing a copy for this DVD Review. We were in no way compensated and all opinions are strictly our own.

« DVD Reviews: Ladybugs
Music Reviews & Giveaway: What Are the Odds? »