You are here: Home / He Cooks / Food Reviews: Naan Pizza

I want a homemade dinner, I want it QUICK, I want something that I ENJOY and I DON’T want to spend a lot of time in the kitchen (or at the grill). My husband is even PICKIER. You see, we used to own a very popular restaurant in Providence (as well as having done quite a bit of catering, etc). Second rate is NOT AN OPTION when it comes to food (that goes for both home cooked as well as restaurant).

That doesn’t mean that I don’t like to have a sandwich, pizza, or something easy for dinner. It just means that it better be darned GOOD. I do prefer when it’s someone else who’s gone through the trouble of creating my meal (I don’t particularly care for cooking – just eating).

I love trying new foods and styles of cooking. I’d never had authentic Indian food before and I was excited when Tandoor Chef contacted me about tasting their Naan Pizzas.

WAIT – YES YOU READ THAT CORRECTLY. I said that I was going to be trying frozen restaurant quality PIZZAS made on Naan Bread!

I was sent four different varieties including 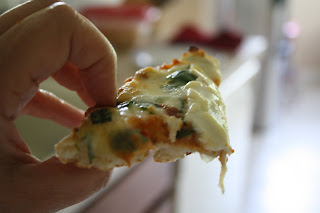 From the moment I opened up each of these wonderful pizzas, I could see the quality toppings and the hand stretched crust made from all-natural ingredients. Tandoor Chef takes great pride in their authentic tandoor cooking and if I had not opened the box MYSELF and heated them up, I would never have known that they were a frozen super-market product.


Just a hint – these pizza’s are UNBELIEVABLE on the grill. I use charcoal and I put a foil pan in the center of the grill and surrounded it with briquettes, so that I didn’t have a direct flame on the Naan Pizza’s. I actually let the pizzas defrost a little bit as well (because I didn’t want to burn them) before placing them on the grill rack. As soon as the bottom got brown and the cheese on top melted I took them off. THEY WERE HEAVENLY!

I love the fact that all of these pizzas are vegetarian, as I often look for non-meat alternatives for dinner. They’re also NOT AFRAID of flavor. The spinach and paneer cheese pizza (which was my FAVORITE) was laden with garlic and seasoned PERFECTLY. While these pizzas probably should feed two people, I wasn’t about to give up a single bite of mine (and I wonder why I don’t lose weight…LOL).

I’ve already scoped out where I can buy them locally, because these are going to be one of my grilling staples. I’ve decided to grill a bunch of them and cut them into small bites as an appetizer for our next cookout!

Thank you to Tandoor Chef for providing products for this food review. We were in no way compensated and all opinions are strictly our own.