You are here: Home / They Watch / DVD Reviews: When in Rome 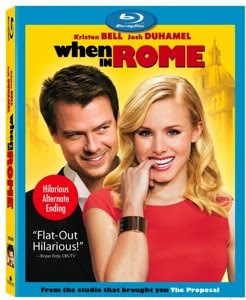 When in Rome [Blu-ray]

When I receive a movie like this I say “oh shoot, not another prepackaged rom-com.” Also, as usual the viewer has two very likable actors, and in the first act they make a connection, and in the third act they make some romance. Along the way there are usual speed bumps. Here comes the oddity – I really do enjoy both of the starring actors in this film, especially rom-coms Bell who was successful in Forgetting Sarah Marshall

and Duhamel, who was great in Win A Date With Tad Hamilton

. Without both of these two and the supporting characters (well get to them later) the film would have fallen flat.

Here are the plot basics: A workaholic woman (party planner for the Guggenheim) who can’t find love goes to her sister’s wedding in Rome and hits it off with a groomsmen. She feels betrayed after misunderstanding his encounter with another woman. She then drinks a bottle of champagne that is as large as her torso and takes some change from a fountain. The woman is unaware that this invokes a spell that makes the throwers of the coins fall madly in love with her. They then all trail her back to NYC where the groomsmen is perusing her as well, presenting her with the question, is it the spell or true love? 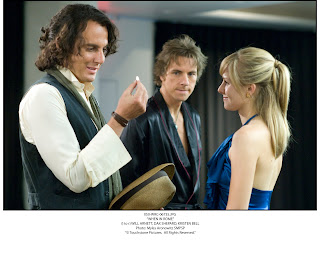 This brings me to the suitors that are madly in love with Beth. They are all modern media stereotypes, the metrosexual male model (Dax Sheppard), a Chris Angel like magician (John Heder), an artist who can’t paint feet (Will Arnet), and the owner of a sausage company (Danny DeVito). The comedy of the film generally works off these characters.

While John Heder, and Will Arnet’s antics are all hit or miss, Danny DeVito is absolutely hilarious. Without giving anything away there is a Tiffany bag with smoked sausage as the weirdest romantic gift in a film ever. 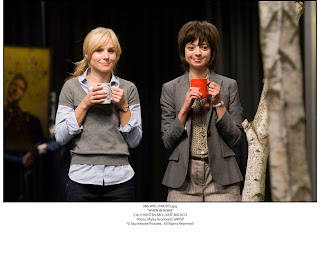 The whole film plays out just as it should. It is quite predictable.

Now for the special features:


Alternate Opening & Ending – An opening without a Ghostface Killah cameo, hell no. The alternated opening just did not play right with the rest of the film it really sent the wrong message about the characters.


Extended Pain with The Suitors – Short,lame special deleted scene about the face of the suitors. Also a good omission from the film.


Deleted Scenes – All thankful omissions. My attention span thanks you Mark Steven
Johnson for cutting this from your film.

Music Videos – Truthfully I could stomach no more of these special scenes. I only watched the 3OH!3

song which I though was OK but could not remember from the film.


What’s the Craziest Thing You’ve Done For Love? – The cast talks about love.


Ratings are based on a 5-star Scale


Overall: a mediocre rom-com that is a decent rental.
2 pennies from a fountain out of 5

When in Rome [Blu-ray]

is available for purchase for $22.99 from Amazon.com (as well in DVD


Thank you to Buena Vista Home Entertainment for providing this title for our Blu-Ray Review. We were in no way compensated for this post and all opinions are strictly our own.