You are here: Home / They Watch / DVD Reviews: Mary and Max 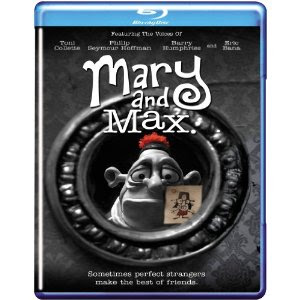 Wow, Pixar eat your heart out. Not to slam Pixar, they make some of the smartest widely appealing films out there (I really enjoyed everything that they have put out). Then comes Mary and Max. Done by a small studio with a small budget and it is just as affecting as any other film. Finally, an animated film for the over 13 crowd and guess what, no talking animals. This film is a fantastic animated representation of an unlikely friendship between two continents.

The film’s  basic story is… 8-year-old Mary Dinkles a, bespectacled Australian girl ,and Max Jerry Horowitz, a 44-year-old obese Jewish atheist with Asperger syndrome who frets and sweats through an anxiety-filled existence in New York City. Mary goes to the post-office with her mother (a Dame Edna look-alike who frequently gets trashed on sherry while her husband does bird taxidermy out in she shed). She picks Max’s name out of a phone book at random and decides to write him a letter, asking him where babies come from. Max writes an insanely long and awkward reply, giving Mary a random run-down of his crazy habit. Thus begins their 22-year correspondence, which the film follows from 1976 to 1998. Along the way, Mary grows up (a social outcast) and Max grows fatter and more socially awkward as he suffers through a series of emotional traumas.

The film’s design is absolutely fantastic. The clay really conveys a story that could really have not been told another way. Here is just something to think about is you watch this film: everything was done in camera! Holy Crap. Every set, every character, every prop, was captured in-camera, with no CGI assistance. And the voice acting is great with Philip Seymour Hoffman and Toni Collette as the two leads
how could you go wrong?

Commentary with Writer/Director Adam Elliot –
The director really gives a lot of insite on how he created the world that he did.

Behind-the-Scenes (SD, 8:15) –
This is more of your traditional “making of” documentary.


Alternate Scenes (SD, 2:01) –
Glad to see that these two scenes were cut because they were very dark.

Harvie Krumpet Short Film (SD, 22:03) –
Don’t think just watch. This was one of my favorite watches of the year so far, you need to buy it now.

Mary and Max  is available for purchase at Amazon.com and other DVD retailers.

Ratings are based on a 5-star scale
Five anxieties out of five.

A copy of this Blu-Ray was provided for our review. We were in no way compensated and all opinions are strictly our own.