You are here: Home / They Watch / DVD Reviews: Daybreakers 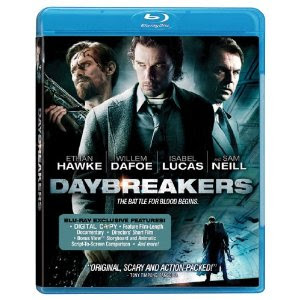 Does this film suck? I love puns. No, but this film really does suck. The wife-to-be wanted nothing to do with this dystopian, vampire, and plague mash-up. I did. B.T.W., I think that was the shortest complete sentence ever. I digress –I miss and love you Gary Coleman, the world needs more short junkies. Sorry, I feel distracted today, back to the task at hand. Lately the whole vampire this has blown up and it looks like Ethan Hawke wanted a piece of the pie. Too bad the pie has been sitting on the shelf a bit too long.

I really despise all of the vampire series of late, Twilight (the least terrible, they do still make me wanna gouge my eyes out) and Underworld (a new breed of terrible, I think I hear a tagline for the fourth in the series). With that, the Sprague brothers jumped on the train. Their last feature Undead was a fun zombie/alien mash-up. In this film they brought a concept to life that was very interesting within the previously stated cannon.

First – the concept of Vampirisms as a modern disease is freaking brilliant, Mad Bat Disease, I buy that.

Second is that after a while Vamps run out of people to drink, hell yes no one has addressed that before (take that you polo playing vampires of twilight).

Third and maybe most important is that Vampires (I capitalize because they are people too) need to drive special no sunlight cars during the day, aw hell virtual Vampire cars = bad ass. That’s just about it. If this is cool with you then well you’re me. Oh, and the whole film is a metaphor for oil, I think.

Now, the real synopsis: By 2019, the human population is almost gone. Vampirism spread quickly and most people have transitioned into them. All the humans are rounded up and framed for blood by corporations. Those who can’t afford the corporate controlled blood will eventually transition into really effed up bat things. As with any population reliant on a finite resource, the vampire leaders soon find themselves on the verge of a disastrous blood shortage. The Vampire races appears to be done for, so the leader of the primary blood supply company, Charles Bromley (Sam Neill) approaches his chief hematologist Edward Dalton (Ethan Hawke), in hopes they’ll be able to create near blood (like my reference to the pointlessness of non-alcoholic beer). Ethan Hawke then realizes that vampires are lame and people should fight back. He meets Elvis (William Defoe) and then Elvis says some funny things.

The design of the concept and the visuals were both impressive. While the execution of both of these falls apart during the course of the film. The acting never really hangs in there – sorry Ethan Hawke, there is only so much acting that you can do with your eyebrows. Sam Neil plays the same villain role he always does. William Defoe is freaking amazing, not making much sense and spilling Arnold like one-liners all over the place. The best being “Living in a world where vampires are the dominant species is about as safe as bare backing a 5 dollar whore.”

And now for special features!!!!!!

This feature was an hour longer and more compelling than the 1 hour and 30 minute move itself. At least the directors care about the movie that they made.

I should really stop listening to these. The directors seem nice and I want to be friends with them.


A short film by the Sprague Brothers;

I dug this and it showed that they really enjoy their craft.

With a better cast and crew (directors included) this film could have been great on premise alone. But, it was not. There are sections and concepts for the film I really enjoyed but as a whole the film just fell apart.

is available for purchase from Amazon.com for $24.99 (or on DVD

Thank you to Lionsgate Films for providing a copy for this Blu-Ray Review. We were in no way compensated for this post and all opinions are strictly our own.