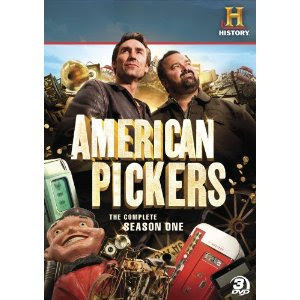 As anyone who knows me I would tell you that I really hate reality television. Well, except for the really trashy stuff. I even despise American Idol. I feel like reality programing has two possible outcomes, exploitation or obsession. Neither of these outcomes are good. It contributes to a celebrity or in the case of exploitation pseudo-celebrity obsessed culture which makes me sad that these people to the creations of media arts in this county. American Pickers located on the history channel (programming that I usually do not watch, I find an Americanized view of history unnerving and there are as many errors on this station than a 6 grade history book). I assumed that this program would be exploitation, and by hell I was right.

I sat down with the wife to be and plugged in. The first thing that I realize is that the two hosts (Mike Wolfe and Frank Fritz) or even protagonists are complete A-holes. These two opportunistic jerks exploit people with a mental illness (hoarding) in to selling their stuff and then turning an insane profit on it.

At first, the show felt fine. As I let the show sink in I had some real problems. First is the obsession of out two capitalist swine of hosts; three to four time an episode they state they are just around to make a buck. This makes me sick. Granted that is what we deal with a few thousand times a day. Being reminded this blatantly
really hurts everything I stand for. These two guys are the Wall-Mart of reality TV.


One more major problem is the lack of an arc or any character development. This was tried in the third episode but was a complete failure (Mike and Frank get mad at their secretary). A dramatic arc makes all reality shows or any shows for that matter entertaining. Keeping up with the Kardashians is more compelling and engaging than this. The characters on Pickers are inhumane and as deep as a piece of paper. This is evident in every episode because they almost always have the same quotes in them about “picking.”

While neither the wife-to-be, nor I liked it at least the video translation was good as well as the audio. Thankfully there were no special features to be found.

I give to show two pieces of trash and no stars.

Thank you to The History Channel for providing us with a copy for this DVD Review. We were in no way compensated and all opinions are strictly our own.