You are here: Home / They Watch / Father’s Day Gifts: The Virginian – the complete first season 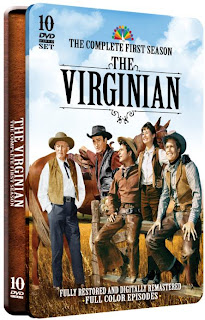 Buying a Father’s Day gift (or any gift) for my dad gets boring. He’s almost 83 years old and I have always gotten him the same things OVER & OVER & OVER again.

1. Pajamas – usually silly PJ’s that he probably wouldn’t wear
2. Golf Stuff – but in the past few years he had to give up golf
3. Crossword Puzzle Books – But so does EVERYONE else. He must have a LIBRARY FULL OF THEM.

It’s weird that I never noticed some of his other “likes” that I could have picked up on.

For example – Every time I call the house I ask what he’s doing. His answer is always either: “I’ve got the game/race on” or “Watching cowboy movies.” My next question is always: “Who’s winning?” It’s our joke, because he always tells me he doesn’t know.

At 82, my dad grew up in a time when Western Movies and TV Shows were the ONE THING that every boy/man watched. Heck, even I GREW UP on these classic shows. 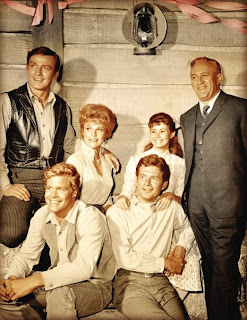 Do you remember “The Virginian

“? Timeless Media has just released the Complete First Season of the TV show that was based on one of the FIRST GREAT NOVELS of the American West by Owen Wister. It eventually became the 3rd longest running western TV show (just behind “Bonanza” and “Gunsmoke”).

I had the opportunity to screen the first season and I have to say – James Drury was HOT and that boy (MAN) could ACT! With actors like Lee J. Cobb and Harry Morgan, this was a series that should have been brought back a LONG time ago.

The story lines were way ahead of their time as well. Stories of courage, race relations and tolerance and more were tackled. Being one of the FIRST TV SHOWS to expand to a 90 minute episode, this gave them time to really create a mini-movie each week so that the story lines were REALLY well developed.

This Limited Edition Boxed Set includes ALL 30 Episodes of Season One as well as  Bonus Disc with Interviews with James Drury, Roberta Shore, Gary Clark and MORE. This would be a cherished gift for any dad who remembers the good old days of TV. I know my dad is gonna love it (hope he’s not reading this).


Thank you to the Timeless Media Group for providing the set of DVDs for this review. We were in no way compensated for this post and all opinions are strictly our own.