You are here: Home / They Watch / DVD Reviews: Tetro 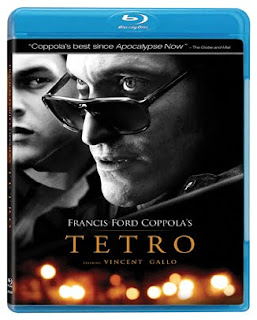 It is hard to review this film without first looking back at Coppola’s work. I despise the most of it, Godfather part 1 &2 are fantastic as well as The Conversation, but from then on the suck fest begins. Apocalypse Now is bloated and misguided, yeah I said it (this is my f**k you to film school), as are the rest of his films.

Tetro  proves to the world that Francis can still make a film, and he proved to me that I need a late entry to my favorite films of the year.

It all begins more or less straightforwardly as we see young Bennieaarrive in Buenos Aires on a cruise ship he has been working on. The craft needs repairs and will be docked for a week, giving him some down time to visit his brother Angelo whom he hasn’t seen in years. The eldest boy, now going by the name Tetro (shortened from his last name)  ran away to go on sabbatical in order to write. Never good enough for his famous father, Tetro hid away in South America and severed all ties to his life in America, including his young brother, to whom he had written a letter saying that he’d be back to take him away. Bennie viewed his sibling as a hero, someone in the arts that was willing to go after his dream. As a result, he left military school and joined the cruise ship to travel and perhaps write something himself. The collision of these two men—two creatures that are linked with love as well as rivalry, much like their father and uncle shines the light on what really happened to Angelo. Blah Blah Blah… 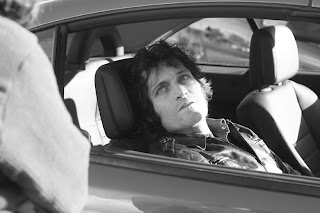 I know the synopsis is kind of lame and a story that the viewer has seen a million times before, but the film works, and until the third act it works on a level that few films do. This film will slpit audiences down the middle. Some will fail to relate to its very oedipal themes, others will really love the way that it is filmed. From an artistic standpoint this film is Coppola’s best (yeah I said it).  It is amazing. Every shot of the film is so well planned and looks beautiful. The idea to shoot the majority of the film in black and white lends a nostalgic feel to the production that hearkens back to the days when Hollywood was about performances and scriptwriting. It is very hard to realize the visuals of this film it jumps from black and white, to hyper colorized to 16 mm wash out seamlessly. That being said the HD transfer is amazing.


The real joy of the film is the acting, and  Vincent Gallo is great. His mental unstable Tetro/Angelo is one of his better characters. While not as good as his character from Buffalo 66 (about 10 years ago), this character is of my favorite of the year. The real star of this film is Alden Ehrenreich’s Benny. Holy crap this performance is worth writing home about, who is this kid and why is he not in every film ever made?

I did not care for the rest of the special features including:

All in all this was one of my favorites of the year until the third act breakdown. This still remains one of the best films of the pastyear and should be recommended on a person to person basis.

is available for purchase on Amazon.com for $31.49 or in DVD format

Ratings are based on a 5-star scale
4.5 megalomaniac parents out of 5.

Thank you to Lionsgate for providing a copy for this Blu-Ray Review. We were in no way compensated for this post and all opinions are strictly our own.