You are here: Home / They Watch / DVD Reviews: Avatar 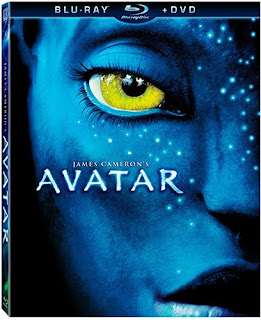 If you still don’t have an opinion about this film you live under a rock. Although that rock would have been helpful to bash my brains in after my theatrical viewing. Now lets rewind a bit James Cameron is my hero, I remember when I was 12 waiting for Terminator 2 to come out on video. At that age it was the coolest thing that I had ever seen. While the films both are so cool I just got so much emotional satisfaction out of Terminator

while I got almost none from Avatar.

Did I mention this was all based on my first viewing theatrically in 3-D? But thankfully I received it on blu-ray for review.

I popped in the WOW THIS LOOKS FANTASTIC blu-ray and then thought… Compared to the theatrical print this looked sharper, it may be due to 3-D dizziness but whatever, I like it on blu better.


First and foremost the plot is lame. This is just another film about the displacement of an indigenous culture, such as Dances With Wolves

, A New World, The Mission

, Pocahontas etc. There are far too many films like this. While it is usually an excellent turn to storyline, I could not get behind this movie’s plot.

Second – the acting is lame. All the characterizations feel like stereotypes from war films, and the Navi (the indigenous culture being displaced) were insulting and bordering on racist.

I really need to stop because I really did enjoy my second viewing of the film. The C.G. acting really just did not do it for me until then.

This film by all accounts looks like all the money that was thrown into it. This is the first time a gigantic film like this has paid off since the first Transformers

film (shut up, I thought it was fun). The entire film was just much easier to take in with a second viewing in 2D. The colors seemed more lush (although a bit over the top). The physics of the animated world were one of the most interesting cinematic creations ever, as were the actual Avatar motions, look and scale, except in the first meeting of Sigourney Weaver’s Avatar (that looked like crap).

The battle sequences kicked ass. I really enjoyed the Mech battle(although not as good as the one in District 9

). The love story was lame and unconvincing. This film was built to sell toys and make 10-16 year old boys grin like fools.

There were no special features except for a dvd copy of the film included in the box. All in all if you want to really show off your HD set-up this film is for you. Its fun, kinda campy and mad sh*t explodes. There is a
story and message but they can be thrown right out of the window. The be kind to earth message was thrown out when they packaged in in plastic with a paper slip cover. I’m going to watch it again in a
year or so and see how I feel about it then to make my final judgment.

Thank you to Twentieth-Century Fox Home Entertainment for providing a copy for our Blu-Ray Review. We were in no way compensated for this post and all opinions are strictly our own.