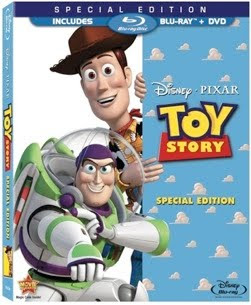 I was fortunate enough to re-watch these two modern era classics.  It is one of the very few films that are certified classic (AFI are you listening) that me and my bride to be agree on.  I just asked her what I should refer to her as because she is cleaning behind me.  Her love for the film harkens back to an old best friend and a terrible experience at sandwich shop.  Also, for the almost the first time I cannot for the life of me remember my first introduction to this film.  I was 12 so I may have been too cool to see it with my family, and I know I remember seeing Waterworld on opening day, Apollo 13, Braveheart, Diehard: With a Vengeance, and even Money Train, but not Toy Story.  I don’t even think I realized that is was the game changer that I had turned out to be.  While I do remember thinking that I was way too cool to see Toy Story 2 in theaters because I was too old, but I did buy the film on the day of release on DVD.
Toy Story

This film is still so engrossing how could it not be though, when every name associated with the film is such a power house Hanks, Lasseter, Stanton, and Docter just to name a few.  Every one of the list are Oscar winners and my personal heroes.  Over all the film should not be something to write home about it’s a 80s buddy cop flick set in a toy box.  But this film is still something very much worth it, I do remember being younger and engrossed by the world of the toys.  Now as an adult I was very surprised by the intricately built characters.  Woody (Hanks) insecurity and desperation add an entire new layer to the film to me.  Buzz (Allen) self importance and triumph was absolutely crazy.
Toy Story is just as memorable today as it ever is as told by the laughter coming for my living room earlier today.  The animation does not feel the least bit dated.  Now, the blu-ray is also of the highest quality.  All of the colors of the film just pop off the screen and the toy textures are fantastic.
Features: 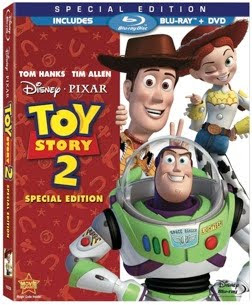 Four years later Woody and Buzz are back for a just as relevant, well written, and passionate cinema for Toy Story 2.  The film is jam-packed which usually would lead a film to disaster (see X-Men 3 The Last Stand).  Just as the first film the writers make the characters shine so much they feel like real people.  This film very well could have been a disaster (see most Disney Sequels) but it felt just like the first film.  It was just a continuation; it almost felt as if the film were one movie split into two parts.
This is great because this film is neither better nor worse than which is completely unusual.  Every theme in the film is explored offer very rewarding catharsis for each of the characters (it still pays off for children and adults).  The laughs are bigger as well as the drama and the emotional payoff.
At this point in the review I would like to personally thank Disney.  Yes, and not wish I could kill the Nazi zombie that is the undead Walt (trust me!!!!).   I would like to thank Disney for finally not making a sequel that is made for McDonalds Happy Meal toys for being more mature and more impassioned about this project than any other sequel that came before it.  Very easily this film could have turned into an isle at Toys-r-Us.  So thank you John for fixing Disney.
The animation feels as new as it did ten years ago.  The colors are bold as well.  Don’t get me started about the texture, the wife to be sure does not want me to talk about them anymore (I was in disbelief that a 10 year old film could look that complex).  This was one of the best technical transfers I have seen I cannot complain at all.    The sound…the sound.  This film was built for 5.1 this really makes every inch of sound spaced used and used properly.   All five speakers really enhance the storytelling and atmosphere of the film.
Special Features:

Thank you to Walt Disney Home Entertainment for providing us with copies for this DVD Review. We were in no way compensated and all opinions are strictly our own.