You are here: Home / They Watch / DVD Reviews: The Baader Meinhof Complex 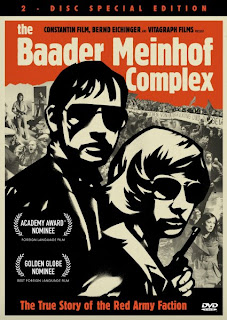 Holy crap this movie was completely bug-nuts. I freaking loved it. This film introduced me to a new piece of history that includes the Red Army Faction. This film was not glamorous this is not a Hollywood film. It’s a hard tough watch about a violent gorilla group that terrorized Germany during Vietnam. The group hated American ideals and was “Hard-Left” communist. They deemed Germany a fascist – too Americanized after the fall of the Nazi party (don’t worry they hated the Nazis too).

The film primarily concerns itself with the early stages of the group and how it was formed (originally a student group). It comes across as a Bonnie and Clyde type film about Baader and Meinhof. Their meeting creates the Baader Meinhof Group or Red Army Faction (the name was created by the media of the time to downplay its’ importance). The rest of the film concerns the Red Army Faction creating havoc while the police chase and try to understand them. Pretty wild stuff.


This film is not for the weak of heart. It is very violent, poignant but violent. Uli Edel is a very good director, but he relies on the hand held handy cam for too much of the film. Unfortunately, the gritty realism becomes somewhat overstated using this technique. The only other issue I had with the film, is that it was a bit bloated (there was too much information packed into it).  The actors as everyone agrees were excellent, the cinematography was good as well. You get a real sense that you are in the seventies. That in itself is amazing.

The action scenes are done splendidly, especially in the beginning of the film. The riots during the visit of the Persian Shah which culminated in the shooting of a student, which in turn was, at least to some extent, the origin of the rise of terror. There are too many characters in it, most of them are not introduced in any way and ten years of complex history cannot be told in an altogether satisfying way. But the film succeeds in giving us a sense of what was going on and how it felt (which I assume was the focus).

I know this is really quick but Bruno Ganz was fantastic. That’s all.


I really dig the definition of the film. It is represented in such a high quality. The film in not particularly grainy, all the scenes are clean, and the color popping is great. The film’s color washes out when it needs and the color becomes vibrant as it needs to be. The sound is just as good. There are so many features they include (unfortunately that are all in standard def):

· The making of The Baader Meinhof Complex

· The actors on their roles

is available for purchase on Amazon.com in both DVD ($13.99) and Blu-Ray

Thank you to MPI Home Video for providing blu-ray copies for this DVD review. We were in no way compensated for this post and all opinions are strictly our own.