You are here: Home / They Watch / DVD Reviews: Ran, Contempt and The Ladykillers – The Studio Canal Collection

“[Cinema is] the most beautiful fraud in the world.”

I am attempting to review three very classic movies at once so please excuse my insanity. This is really one of the first really exquisite sets that have been released on blu-ray yet. Jean-Luc Godard’s Le Mepris, Alexander Mackendrick’s The Ladykillers, and Akira Kurosawa’s Ran. This set is a film geek’s wet dream. I know it put a strain on my relationship when this showed up to the house. Much to my chagrin I am going to have to split this into various sections. 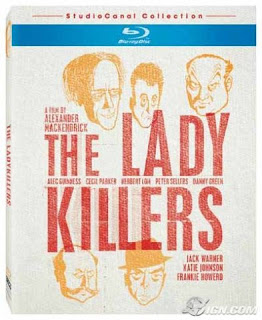 I had never seen this film prior to this viewing, and holy crap I was really missing out. It was like I was only a portion of a person before, now I am complete. The set-up is great, a widow rents a room to would be “musicians”, but they turn out to be robbers. This is fine – concealing it from this old woman is funny enough, but when she finds out about it she begins to feel a sense of responsibility. The hilarity meter stays in the red from this point on. The film breaks the dial when the bumbling criminals decide to include murder as an option for their getaway scheme. By hilarious I mean ironic humor, this is a very dark comedy but of the best British comedy of the time. It really is a just a great film. At the time the 79 year old Katie Johnson was one of the greatest good/bad characters in film history. With a cast including Peter Sellers and Alec Guinness how could you go wrong? I have never seen a film directed by Alexander Mackendrick and now I may have to see them all. The real treat of this film is the script by William Rose, who also wrote Guess Who’s Coming to Dinner? And It’s A Mad Mad Mad Mad Mad World, two of the most classic comedies of the era.

As if the loss-less soundtrack was not enough, the transfer to Blu-Ray is amazing. Especially considering that this film is nearing 60 years old. While there are some coloring issues this can also be expected of a film this age. I do hate the 1.37:1 aspect ratio but it is the original form it was presented in so I should not complain.


Also, the special features are nothing to complain about.


* Included is an Introduction by Terry Gilliam, which was way too short.


* A documentary that is way too long (45 min) about the history of Ealing Studio in England.

* Also a bit on the long side is Interviews with Allan Scott, Ronald Harwood, and Terence Davies.

All and all great film and transfer 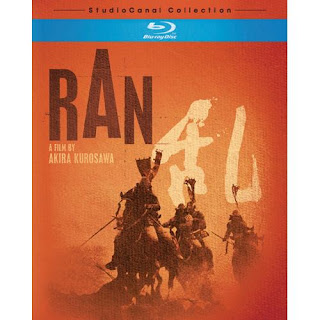 This is one of the finest of Kurosawa 55 year career. Some may call it his top film, while I do not consider it to be. I really do love Seven Samurai and The Bad Sleep Well. The word Ran in Japanese means chaos. This film is a masterwork of that word. This movie is three hours of sh*t and by sh*t – I can give you a brief list:

a. The wife to be hates it

There are no happy endings in this adaptation (kind of) of King Lear. This is a film about royalty doomed because of their evil. But it also makes the point that all humans are evil. This is the kind of focus I love in film. It really shows the inner essence of the abilities of mankind.

This film follows the story of the aging warlord Hidetora who, in an attempt to restore peace, divides his kingdom between his three sons – Taro, Jiro, and Saburo – and retires from his duties. However, one of his sons sees this as unwise and is banished by his father, leaving his two brothers in charge of two of the three castles left in their hands. It isn’t long before they are overtaken by greed and eventually betray their father, leaving him in the hands of a philosophical jester and a loyal retainer. This betrayal ultimately leads to war, dividing the family and driving Hidetora insane.

I was really hoping for a better transfer into high definition. This is a film that no expense should be spared on. There are heavy layers of grain throughout the film and some of the edges are blurring. Textured objects don’t look as fine as they could. The audio track was also underwhelming.

The supplements are vast and lengthy just as in the case of Ladykillers we have:

* AK – A documentary that is about the making of Ran with a very detailed look at Kurosawa as a director. This runs way too long at 1 hour and 20 min.


* The Epic and Intimate – forty minutes of interviews with Kurosawa and his producer. Nuff said.


* The last two are being lumped together because they collectively bored the crap out of me. The Samurai and the art of samurai feel like crap rejected specials from the history channel. They run about an hour long each so have your aderol at hand.

Casual film watchers may hate this film. But they may hate most of the films that I like so too bad. I just feel like more could have been done

5 dead dynasties out of 5 for the movie

2 confused eyes out of 5 (I know impressive) for the blu. 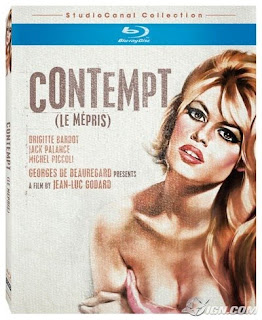 Godard is my hero (hence the opening quote)…I usually survive on a steady diet of Godard, Kubrick, and Fellini. Contempt is one that I had seen but has not been seen for quite a while. In fact I could not remember most of the film. So, I began with watching the trailer, even the trailer is fantastic. So for the first time in a while, I was super excited to watch this film. I sat down the wife to be and finally exposed her to my second love French New Wave cinema.

And thank you Studio Canal for adding the new scenes…

This film feels like Godard’s 8 ½. This is Goddard’s tribute to the tribulations of filmmaking. We see this with the main character Paul. So the general plot goes, Paul is hired by an A-hole US producer Jerry Prokosh to rewrite a screenplay for his adaptation, which Fritz Lang (himself) insists on shooting in a hyper-stylized, mythological fashion. Paul’s relationship with his trophy wife Bardot disintegrates as she feels abandoned by him to Prokosh’s advances, and sees him subdue himself to these great men.

This is the first Bridgette Bardot film that I own on blu-ray and she may own the film as much as Goddard. This may all feel like a high drama but it is not completely at times it a parody of the cinema system. The main humor comes from the irony of creating an adaptation of the odyssey. This was some sort of meta-cinema.

Of all the Studio Canal Collection films they really did the best job on this films transfer. This film looks CRAZY to me – fantastic, every color just pops right off the screen. The scenes from the Odyssey look especially great, but some scenes are not absolutely brilliant. The sound was great and thank you again Studio Canal for not giving us another crappy 5.1. The original 2 channel track is included and still sounds great.

This disc came packed with supplements (all presented in STANDARD DEFINITION…booooo).


* A fantastic interview with a chain smoking Godard that is about an hour long called Once Upon a Time There was Contempt. This was absolutely brilliant. T


* Then there is the Dinosaur and the Baby which was absolutely amazing to hear Fritz Lange and Godard talking to each other about filmmaking.

Five rolling cameras out of five.

Thank you to Lionsgate Films for providing blu-ray copies for this DVD review. We were in no way compensated for this post and all opinions are strictly our own.