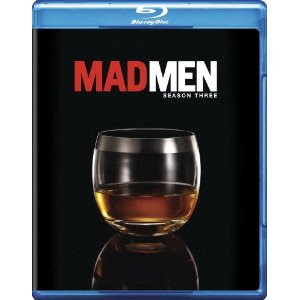 It’s funny to me that Mad Men is not analyzed more. This entire show’s central theme is so fantastic that I can’t ruin it for you readers. Ok I will. This show is about the façade of advertising and the similar façade created in the lives of the characters of this show. The dualism is subtle and freaking brilliant.

I had heard about Mad Men when it first aired but it took a couple of years. After I had purchased the first season on blu-ray it sat on my watch in now shelf for months. Then the wife to be and I watched it in a 3 day marathon and fell in love with the show. Ever since then the DVR has been set.

The third season works on the foundation of the first two. How deep does the rouse of Don Draper go? This season Don’s that the layers just keep on coming; as does everything else in this season.

The most interesting parallel of the season is the JFK assassination. The show is also mirroring the breakdown of the Camelot by way of Sterling Cooper or Draper’s marriage. This show continues to please its viewer with every metaphorical episode.

As always there is no higher quality television right now at least not on cable. I shouldn’t even have to mention the design of the show but it truly is amazing. The costuming and details are fantastic and are worthy of no
lesser quality to this DVD. The design is as good as the acting. January Jones is particular fantastic and as always John Hamm is the perfect actor for this role. The real standout of the season is Sal Romano played by
Bryan Batt. This is truly a revelation his character became more and more complex by the episode.

As far as special features there are relatively a few but they are quiet fantastic.

Medgar Evers: An Unsung Hero- this is a fantastic two part documentary about racism in the south. It is a picture of the south in the last days of segregation. This is feature legenth also running over an hour.

Cleaning the Air:  The History of Cigarette Advertising – Another fantastic documentary about the ad industry mixing with the tobacco industry.

We Shall Overcome: The March on Washington – This is a photo document accompanied by the Dr. King speech. Truly remarkable.

The DVD feels very complete. With great features and quality and programming.

Ratings are based on a 5-star scale
4 stars the lie deep under the surface out of five.

(DVD) are available on Amazon.com

Thank you to Lionsgate for providing a copy of Mad Men: Season 3 for this DVD review. We were in no way compensated for this post and all opinions are strictly our own.