You are here: Home / They Watch / DVD Reviews: Brothers 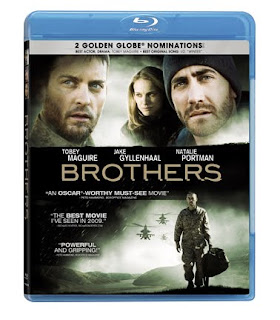 I want to begin this review with some knowledge I gained from this film. This movie really wants to be as good as Rambo, yes, I just friggin said it. That said I really love Rambo. With Vietnam films there were a bunch of films made in the First Generation (films made during the war) that dealt with the atrocities of war such as Deer Hunter, Rambo and Boys of Company C. Then the second generation fled in with Chuck Norris on its shoulders shooting everything up with films such as Missing in Action. The final and third included Full Metal Jacket and Platoon and gave a retrospective eye or critical view on films about Vietnam (You really need to see FMJ again). It really tried to be a first generation film about the conflict in Afghanistan but it really ends up feeling like a poorly acted third generation.

My main concern for this film is Tobey McGuire as hubby. I know he got nominated and all, but he really ruined the film for me. His entire part in the film call for him to look like he had Graves Disease and yell a lot, if that gets someone a Golden Globe nomination then geezz. But all of this happens in the last 20 minutes of the film leaving the viewer confused about the point of the film. Was the films point to talk about how War makes people do horrible things or how war can bring a family together in times of tragedy? 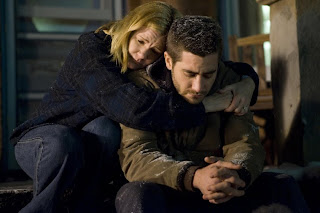 This film was directed by one of my favorite directors Jim Sheridan. Without question this is his most misguided film. Not that any of his previous films were misguided, but he had much more focus than this then that film he did with 50 Cent. This is not to say that the film was not well shot – although I have gotten very good at spotting a New Mexico stand in for Afghanistan, it must be something about the color of the rock. The cinematography is limited due to the confined spaces in the film but the colors look great and the absences of color also looks fantastic.

As for the special features there is a commentary I could not bear to watch because that would have forced me to watch this again, It would be nice if Mr. Sheridan would apologize to me during the track.

There are also featurettes called Remade in the USA and Film and Family which took me as long to watch as I did forget.

One crazy ass ex-marine out of five.

Thank you to Lionsgate Films for providing blu-ray copies for this DVD review. We were in no way compensated for this post and all opinions are strictly our own.