You are here: Home / They Watch / DVD Reviews: Up in the Air 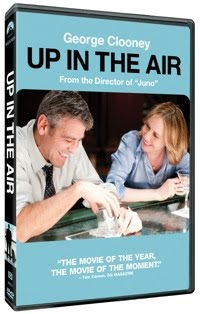 Up in the Air

I have one thing to say about this movie —–
CLOONEY
That’s all I really need to say. It seems that as of late, George (getting a little familiar aren’t I?) has been taking roles that are RIGHT on TARGET for him. Up in the Air, is one of those flicks that would NOT have been the same without him. He is SO believable in the role of Ryan Bingham, that you wonder if this is not exactly who he is.
Ryan Bingham (George Clooney) is a man who’s job it is to travel the country and fire people. You’d think with a set-up like that you’d hate the guy right? But this story is really a personal journey of a man and the relationships that develop along the way. Neither a chick-flick nor a bromance movie, Up in the Air will appeal to just about everyone. With stellar performances by Vera Farmiga (Alex) as the mirror image of Ryan that allows sparks to fly, and Anna Kendrick (Natalie Keener) as the young overachiever,  you’ll understand why this movie garnered so many Academy Award nominations.
This is a MUST SEE and I suggest this you RUN out and grab it ASAP. Oh and if you’re a Clooney fan like MOI – prepare to swoon, because that “look” runs rampant throughout the movie (you know EXACTLY what I mean).

* To Know Me Is To Fly With Me – Totally agreed with the editing based on this scene.
* Real People Firing and Irate Employee -You could see why they chose the scenes that they did.
* Thumper and Extended Boat Scene – Most of this was in the actual movie – but still fun to watch.
* Omaha Montage – Almost an alternative ending. I wish they’d kept this in the original film.
* Spacesuit -SO GLAD they left this out of the movie.

Ratings are based on a 5-star scale
Overall: 5 (and an extra star – just for George)
Review by Broad “Z” – Zippy

Up in the Air

Thank you to Paramount Home Entertainment and Click Communications for providing us with a copy for this DVD review and giveaway. We were in no way compensated and all opinions are strictly our own.