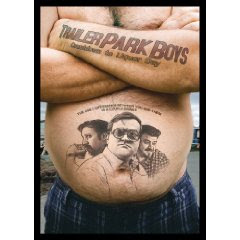 I first discovered the Trailer Park Boys after dropping out of college (the first time).  Way to start an interview B my mother should be proud.  I was stealing cable from my neighbors so i could watch the BBC Office finale (yeah i liked it before it was cool).  Before it started,  I caught the last few minutes of the Trailer Park Boys (on BBC America) and it was fantastic.  The premise is fantastic, trailer park morons sell weed and get arrested.

So, after that night I wish that I had followed up but…the man came down on me…no cable.  Sorry mom again, please forgive me.  Or I forgot because well I was probably stoned.  Shit sorry mom.

A few years later, yes this review takes place over the course of five years of my life,  I met up with a buddy who went to school in Nova Scotia (I know really).  He decided to show me some Canadian customs, and I decided to oblige him.  Sorry mom.  These customs are otherwise known as alcoholism. And while it seemed like a good way to learn aboot a new culture (I know I could just watch Tyra, why are all her guests Canadian?).  I may not have been able to drive or walk and woke up in shrubbery questioing where my car was (thank God for suburbs and thank God Dude Wheres My Car had not been made yet).  Well, I got to his house and he is watching the show Trailer Park Boys

.  It was love at first site, but I never got to see the show again until I watched this film.  Wow, that was a longer story than I had thought –  Sorry mom.

I was slightly familiar with their shenanagans.  I have to say that this was nothing compared to the show.  The film opens with them getting out of jail, then their trailer park is shut down, what are they to do? Shenanagans…such as stealing cats, starting an auto repair shop, robbing a bank, or shaving their neighbors heads.

For the most part the humor was fleeting at best, with a few really funny moments-  but most jokes did not get a chuckle.  This may be because I am older, or not stoned, or I don’t know.  I was really confused by the characters of Julian and Bubbles. We are on some level meant to connect with them most but I found it difficult.  Maybe weed jokes and morons aren’t funny to me anymore (Adam Sandler voice isn’t).

There are some really funny things in the film.  J-Roc the rapper was fantastic. I was choking every time he was on screen.  There were a few scenes between Lahey and Randy in the kitchen that were great.  They sound like an old married disfunctional couple with some serious sexual problems.  Plus, any time the camera crew showed up it was dynamite.  I forgot that this was a mocumentry.


Deleted scenes:  Mostly the usual crap but there is a few diamonds in the rough.


Alternate Ending:  This ending involves people being urinated on…no thanks.


Behind the Scenes:  This was much funnier than the film. They played it all in character and nailed it.


Making of the Car chase: It was pretty cool to see how the actors could focus on acting while in that car.
m done by fans…boring.
Ratings are based on a 5-star scale

one bong hit out of five.

is available for purchase at Amazon.com

Thank you to Screen Media Films and Bender/Helper Impact for providing this Blu-Ray for our DVD Review. We were in no way compensated for this post and all opinions are strictly our own.