You are here: Home / They Watch / DVD Reviews: Precious 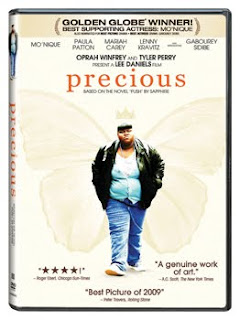 Precious: Based on the Novel “Push” by Sapphire

I rushed to try to get in as many of the nominees for Best Picture as I could BEFORE last Sunday night’s Academy Awards. Unfortunately, I only got to see a handful of them (not including the one that won Best Picture). Luckily, I did get to see the MASTERFUL “Precious.”

I had been forwarned by a good friend to have a box of tissues nearby. She didn’t think that I’d like this DVD, mostly because it was so depressing. So, this is for YOU Victoria!

By now most of you know the background of this powerful story, since the book “Push

” by Sapphire was a bestseller. Precious

is the story of Precious (Gabourey Sidibe) an illiterate young teen, who’s pregnant with her second child (by her mother’s boyfriend) and living in an abusive home. Because of her pregnancy, she is transferred to an “alternative” school where she encounters a teacher (Paula Patton) who helps her really find herself and her strength.

While Precious’ life  is filled with what seems like insurmountable circumstances, she rises above. Sorry, Victoria – I found this film to be INSPIRING and a celebration of how people can TRIUMPH over adversity.

The performances by Mo’Nique as Mary, Precious’  mother as well as Gabourey Sidibe as Precious are nothing short of amazing. 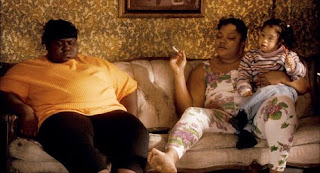 I was a little shocked that Lenny Kravitz got 3rd billing, as his part was very small (a minor character – although this may have been the result of having been left on the cutting room floor). Mariah Carey as the social worker who cares (perhaps the only trite character in this movie), was quite convincing (I guess she learned a thing or two from “Glitter”). Even if you got to see Precious in the theater, you’ll want to check out the DVD or Blu-Ray as the special features give you an even GREATER taste of what this movie is all about.

From “Push to Precious”–  takes you from the book by Sapphire through how Lee Daniels found Geoffrey Fletcher the screenwriter. The passion that each of them had for the making of this movie, shines through. 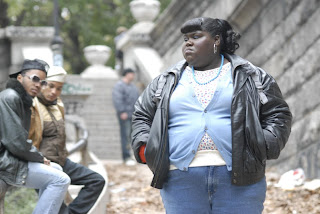 Gabourey Sidibe’s Audition – Holy Cow! From the moment she began this audition, she WAS Precioius. Not only did she capture the soul of the character, but to see her transform PHYSICALLY shows what a truly gifted actress she really is.

Deleted Scenes: “The Incest Survivor Meeting” – Not as powerful as I would have imagined and it’s probably the reason it never made it to the final film.


There are a TOTAL of eight special features, each one better than the next.

Precious: Based on the Novel “Push” by Sapphire

is available for purchase from Amazon.com for $16.99.

Thank you to Lionsgate for providing a copy of Precious: Based on the Novel “Push” by Sapphire