You are here: Home / Fun / DVD Reviews: Flame and Citron 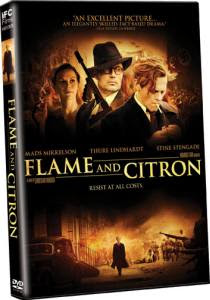 First I must mention that this film should have been re-titled just FLAME.  This movie is just owned by Thure Lindhardt.  Now that is over, I have not been watching my WW2 movies lately and am relatively confined to the general films with topics in the Pacific and Germany.  This film to my surprise was set in Denmark at the height of Nazi occupation.   Well, it turns out that Denmark is no different than anyplace else for Nazi fighting.  Nazis get killed and the viewer feels better.  Its like smoking a cigarette (which is another thing the film made me want to do, it just looks sooooo cool), the protagonists are lighting up almost the entire movie (another reason for the name flame?).

OK, the basic plot of the film is…Nazis occupy Denmark, Flame and Citron kill Nazis,  Falem and Citron kill woman Nazi, Flame learns how to love with a possible Nazi, Citron has some shit with his family.  They get confused about who to kill.  This all may seem pretty simple but it is not. Getting this far was a pain the ass to figure out.  But the movie was cool, so I will let it go.  It might be that  the film trying to get all film school on us and saying that war is confusing.  HMMMMM….

This was a true story. As some of you may know I am very skeptical of films that claim to be “true” because the Blair Witch Project sucked, and so dos that inspirational Will Smith film, but this film seems true enough for me to believe.  Now lets get down to the acting.

Thure Lindhardt ownes the film.  Flame is a new poster on the bad ass wall of fame.  He kind of reminded me of Bogart meets Josh Hartnett, well he was very noir.  He hit all of his beats well, especially  his cigarette lighting and his trigger pulls.  Mads Mikkelson also “kills it” as Citron.  The dude really knows how to sweat.  If there were an Oscar for sweating he would get it.  If anyone saw him in Casino Royale you know that he sweats.  But in this he lives in a car and sweats totally worse.  He is a bad ass that just wants the war to end so he can go back to his family-  until…You should know that I am spoiler free…..there are “complications”.

This cinematagrophy tries reallly hard to have a film noir thing going the whole time, but it only works some of the time.  The films camrea really excels when there are periods of uninterupted color. I  remember exclaiming how green the grass was.  I KNOW – hard boiled war flick and I am talking about how well it’s photographed.

Over all good flick two molotov cocktails out of five.

is available for purchase at Amazon.com for $17.99


Thanks to IFC films for providing a copy of this title for our DVD review. We were in no way compensated for this post and all opinions are strictly our own.