You are here: Home / They Watch / DVD Review: FlashForward 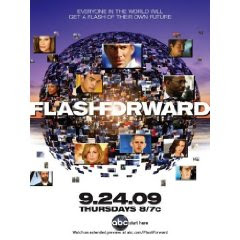 It’s time for me to flash back to September 24, 2009. I was setting my DVR for a new program and… boom; I blacked out and I had a vision of myself writing this review. Just kidding this is not April 29,2010…YET. And I will Not COMPARE THIS SHOW TO LOST!!!!!

The program is based on a Robert Sawyer novel. In this novel the entire world blacks out for 137 seconds (2min and 17seconds) This causes a obvious catastrophe and kills many people. But MOST of the survivors have one thing in common…they see their future on April 29, 2010.

The show boasts a very impressive cast. There are too many characters to mention. At the center is FBI agent, family man, and long-recovering alcoholic Mark Benford (Joseph Fiennes) heads an investigation into the inexplicable phenomenon and what it means. He ties all of the principal cast together. Most of the show flashes between two worlds, the FBI and the Hospital. Benford is the link between the two because his wife Olivia is a hospital surgeon. Mark is clearly the protagonist of the show.

Every protagonist needs an antagonist and the show clearly has one and he is excellent. Simon Campos (Dominic Monaghan) is super creepy as the scientist who may or may not be the cause of the blackout/flashforward. He definitely departed from his roll as a hobbit (Lord of the Rings) and that other show that i promised i will not mention. He as every bit as smooth and creepy as a bond villain.

As luck would have it, the brief peek into the future is supremely eventful and telling for just about everyone. (For realism’s sake, one character is simply on the toilet.) The show is a series of puzzles and linking is the puzzles the fun for the viewer.

This show really started out strong and began to underwhelm around middle of the half of the half of this season(I Iknow I just confused myself). But by the end of the mid-season finale I really felt like the show was picking up again. I could really see myself setting the DVR once the show goes back to the air on March 18th.

Just like the majority of the season the DVD here is weak.


FLASHFORWARD: A LOOK AHEAD  and COULD
Two trailers/previews for the next 12 episodes,

CREATING A CATASTROPHE: THE EFFECTS OF A GLOBAL BLACKOUT
This making of the disaster sequence that was really fun to watch. The viewer really gets a good idea of how the show created the blackout and for a geek like me…fantastic.

I give the show 6 sordid clairvoyants out of 10

is available for purchase at Amazon.com for $19.99

Thank you to Walt Disney Home Entertainment  for providing a copy of FlashForward: Season One Pt.1