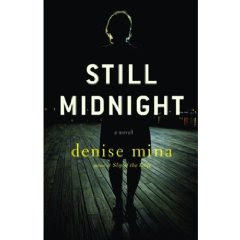 The Anwar family hosts a tragedy as they watch. Aleesha, their pretty young daughter has answered a knock on the door. Two strange men, Eddie and Pat, enter, screaming for “BILL!” Billal, Aleesha’s older brother, guards the open bedroom door, where his wife Meersha lies in bed with their newborn child. Mr. and Mrs. Anwar shuffle, watching their toes, confused, in the hallway. Suddenly, Eddy, who has been eye flirting with Aleesha, pulls the trigger on his gun by mistake and shoots off Aleesha’s hand. The two men run. Outside, behind the house where they see none of this, Omar Anwar and his friend Mo hear the gunshots and run into Omar’s house to the bloody walls and hallway. Eddie and Pat have grabbed old Mr. Anwar on the way out, screaming that they want two million in ransom or the Anwar family will never see their father again.

Called to the scene of the abduction, Alex Morrow is not given the case – her competition and lesser officer, Bannerman, smiles as he takes over. As Morrow curs and bites as she rages her way through the case; we straggle behind her, trying to keep pace.

”. As the video slides past, the characters devour each other, creating even more mess. Morrow, unhappy, makes everyone else miserable. Her tragedy is her son. And her marriage. And Bannerman is a sleazy slap door cop. The Anwar family is engaged in intense hate with each other, all except Aleesha, who yearns after Eddie who shot her, and Omar who remains the only member of the family trying to find his father. Morrow, who takes on the case behind Bannerman’s back, cannot understand how this messed up family could be worth millions. Who is Bill?

Daring, risky, contemporary, unexpected, this in and out film noire drama has an “Eyes Wide Shut” surreal quality. And it’s simply a masterpiece of a crime novel. Totally unpredictable, including characters right out of the “Ravens.” Miss Medina has pulled off an intricate coup: artsy, angsty, and full of genius in plot and sordid but human characters. This novel moves easily into genuine “formidable crime book of the year.” Every page comes back to haunt.
Ratings are based on a 5-star scale

is available for pre-order at Amazon.com $16.49

* This giveaway is open to US residents, 18 and over and ends on March 26, 2010 11:59 EST.
* The winner will be randomly chosen and contacted via email.
* The winner has 48 hours to respond to my email or an alternate winner will be chosen.
* Please make sure you check your junk mail folder
* Good Luck