You are here: Home / They Watch / DVD Reviews: Weeds: Season 5 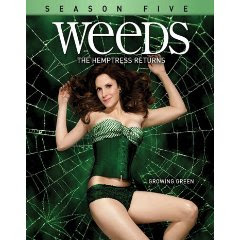 when it came on the air about five years back.  The show started out being very funny, it was a really great concept… suburban woman becomes small time pot dealer to support her family.

This began as a comedy with dramatic elements.  Now unfortunately in the show’s fifth season the comedy has run dry.  The show now exists as a pseudo-soap-opera with funny elements.  Unfortunately, Season 5 is a bit of a chore to watch, because it is just dragging out.  With no compelling storylines left (the resolution of a surprise cliffhanger pregnancy),  I do feel like the show could have ended a couple of seasons ago.  The show could have crafted a compelling ending by now rather than running it ragged.

Nancy has gotten waist high in crap again.  She’s pregnant with a Mexican drug lord’s child, and scamming to stay alive.  The show thrives on its cartoonish characters thrown into a very real world.  The problem with Nancy is that there is nothing funny left about her, as well as there is nothing funny about the baby-daddy Esteban.  The only really fun storyline left is Nancy’s brother-in-law Andy. He is still absolutely hilarious as chief f*ck-up in the family.  His storyline whether it’s dressing up like his dead brother to clear an old savings account (and blowing the money in the matter of days), or trying to get a date with Nancy’s gynecologist always amuses.

I say all of these awful things about this season but it was still very hard to look away from the screen.   This is done every episode by never failing to create a shocking moment.  This show for what its worth exists on shock value alone, which creates a pretty fun show.

The blu-ray is loaded with special features.

There are commentaries on half of the episodes.

Overall an overwhelming but underachieving season from the once great show.  But I will continue to watch week after week because I am addicted.  The show should not be called Weeds

it should be called crack.

Thank you to Lionsgate Films for providing us with a copy of Weeds on Blu-Ray for this review. We were in no way compensated for this post and all opinions are strictly our own.

is available for purchase at Amazon.com for $27.99