You are here: Home / They Watch / DVD Reviews: The Simpsons: Season 20 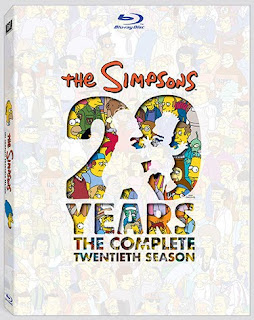 After 20 years the Simpson’s are still a barometer for the times. I remember watching the first episode of The Simpson’s when I was just six years old. My parents wouldn’t let me stay up that late, but fortunately the day before it premiered I broke my leg and I got to watch it out of pity. So began my lifelong affection for The Simpson’s.

Through it’s existance, little has changed. They still take on important social problems weekly, with more tact than South Park. This season’s topics include such subjects as the mortgage crisis in “No Loan Again, Naturally” and the justice system in “Take my Life, Please”

I was a little disappointed with this season, it being one of the season’s that I never got to watch on television. The pop culture references were a little stale, with 10 year old references to Jackie Brown. On the upside, this is the first season presented in glorious high definition (second disc only). This second disc is in HD Widescreen, while the first disc is still in full screen (boo). The opening credits got a complete overhaul for the high definition episodes. The new opening credits are without question for any Simpson’s fans fantastic.
Unfortunately, there is only one special feature….which is a teaser for next season’s shows. I felt like it was an afterthought, and was a bit disappointed.
My final rating?  I give the Complete Season – three flaming Moe’s
Disc One:

and The Simpsons: The Complete Twentieth Season

are available for purchase from Amazon.com and at your local DVD dealer.


Thank you to Twentieth Century Fox Home Entertainment for providing us with a copy for this Blu-Ray Review. We were not compensated for this review. All opinions are strictly our own.