You are here: Home / They Watch / DVD Reviews: I Heart Jonas 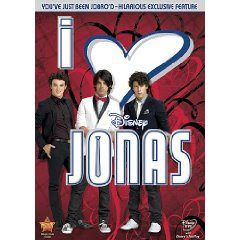 Background: These young men started out with Disney in 2007 and between their reality show “Living The Dream” of their band on the road, and the 2008 “Camp Rock” their fame was assured. The I Heart Jonas

I had never seen the Jonas Brothers before and I immediately fell in love with Kevin, Nick and  Joe Jonas. As they cruise through Horace Mantis Academy they are just real guys. Joe has feelings for Stella, their “costume coordinator.” Stella’s friend Macy (Demi Lovato) is obsessed with Nick, and when Stella thinks of dating Van Dyke the school cool guy, Joe repeatedly messes up her dates with “clothes” emergencies.

In the first episode they meet the Queen of England- hysterical – as Stella has purposely clothed Joe in an absurd outfit. The second episode Kevin decides to become a cheerleader.The guys are performing on “Great Morning USA” the day after Kevin’s debut at the First Academy basketball game. Joe is sick with a croaky voice but he goes to the basketball game anyway, because he has promised Stella. The result are again hysterical.

In the third episode the boys try out for The Three Muskateers, a play. Joe backs out because of stage fright, but of course he ends up as Muskateer Porthos, so he can kiss Stella.

I will let you discover the other three episodes yourself.

The love interest between Stella and Joe, friends since Kindergarten drives the series. What I loved about I Heart Jonas

is how Kevin, Nick and Joe are like all teenaged guys, with all of the teenaged angst and teenaged fun that it represents.

This is yet another great Disney DVD and I simply fell straight on into HEART with these talented young men.

Joe Bro’d with Jordan Sparks – it was in their Cleveland, OH August 27th tour. They’ve been on tour with Jordan Sparks for 2 years. They set up a fake radio interview with all of them at Radio DJ Sidney. Sidney calls Jordan by the wrong name, Jordan Pruitt. He calls the boys by wrong names. He makes Jordan read Cue Cards that make no sense and until the boys tell her she’s been Joe Bro’d – she falls for it. Really good footage.

is available for purchase at Amazon.com for $14.99. If you purchase this DVD by February 14th you can get $3.00 off by entering the code: LUVJONAS at checkout

Thank you to Walt Disney Studios Home Entertainment for providing us with a copy of this DVD to review. We were not compensated for this post and all opinions are strictly our own.