You are here: Home / They Watch / DVD Reviews: Gamer 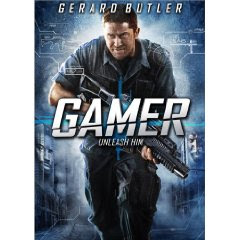 3 : the depiction of acts in a sensational manner so as to arouse a quick intense emotional reaction

Gamer uses this concept time and time again, in it’s theme and on the screen. The film knows what it is and makes no bones about it. It’s just a sexual, bloody mess…..but I love it. The movie depicts a virtual human second life….like second life on crack and for anyone who’s been on second life,you know it’s pretty far gone as it is.

Starring Gerard Butler as a prison inmate forced into a game called “Slayers.” Butler’s character Kable is an Avatar forced to kill other inmates. The concept of the film is a lot of fun with plenty of relevant commentary about our online user interactions. Michael C. Hall as the developer of the game “Slayers,” is the HIGH POINT of this movie. He shows that he’s able to translate his work onto the big screen after an Emmy Winning performance on Dexter and his impressive work on Six Feet Under. His villain is fun, interesting and completely evil.

The film was well shot, and it was probably one of the best LOOKING films I’ve seen all year. The red camera really paid off in it’s ability to shoot action scenes with high detail.

I have to make a point about the cinematography.

During each action scene the detail was so amazing that you’d see single grains of dirt actually flying past Gerard Butler’s face while he’s gunning down another inmate.

Audio Commentary – The audio commentary was pretty standard and basically surrounded the fact that they had only the second red camera to make this. They really spent the entire time talking about their camera and their lead actor.

“Inside the Game: Controlling Gamer” – “making of” documentary – This is an  hour and a half documentary about the writers, directors and actors praising each other’s performance.

“First Person Shooter:  The Evolution of Red” featurette – Another hour and a half documentary. This time it’s about how they thought how great their red camera was. The cinematographer went on and on about how digital shooting sucks.

Anyone who enjoys  the 80’s Arnold Schwarzenegger or Dolph Lundgren films will surely love this action packed romp. While the it’s not the most intellectual film made, this reviewer thought it was a whole bunch of fun.

My final rating? This flick gets 2 out of 5 explosions.

is available for purchase at Amazon.com for under $16 or at your neighborhood video store for $29.99.


Thank you to Lionsgate Films for providing us with a copy for this DVDReview. We were not compensated for this review. All opinions are strictly our own.