You are here: Home / They Watch / DVD Reviews: Dead Snow 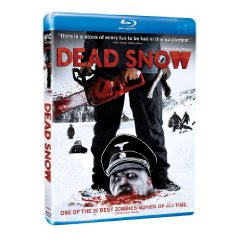 I’ve spent the better part of my life studying film, it is my drug.  So if film is a drug horror films are my crack.  I like ‘em with a cheap and a fast high.  Campy horror with a crazy amount of pop culture references to other horror films this really gets me going.  Thankfully this is one of them.

.  It’s completely idiotic and goofy, but it’s my crack.  You have heard the set up before; college students go to a remote cabin and discover Nazi-Zombies.  The ultimate villains.  I think that I have figured out why it is so fun to watch the buckets and buckets of blood splashed at the screen.  We hate both the heroes and villains.  Watching them get butchered is just fun.

For those who don’t know horror has become a breeding ground for great comedy and zombies always are grounds for some comedic moments.  This film is no different it all plays like a cartoon much like Evil Dead 2

(Peter Jackson).  Like a cartoon the film’s plot is completely incoherent and without explanations.  But any logic may have ruined the fun.

Behind Dead Snow
A nice inclusion.  The cast and crew goofing around.

Burning the Cabin
Footage from a cut scene that was too dark.

VFX
A short segment about the virtual effects of the film.  Kind of short.

Madness in the West!
Directors travelogue about going to Sundance.  Fun.

Madness in the North!
Great extensive doc about the trials and tribulations of directing the film.  This was great but ran long at about an hour.  But really shows how to make a low budget film.

There are also trailers and outtakes.

Ratings are based on a 5-star scale
Four buckets of blood out of Five.