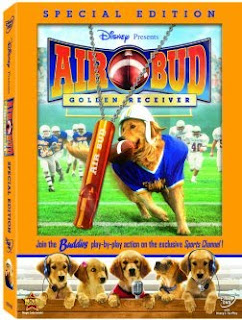 Here we are, back in Fernfield with Josh Framm, Buddy the golden retriever and his Mom.  Josh’s dad has recently died and Josh is still grieving his loss.  The family is going to a basketball game, and Fearlesss Buddy sneaks into the car.  As you all know, Buddy and Josh are already great basketball players.  Buddy escapes from the car into the arena with the professional players, sees the basketball and joins the game – he’s on a winning streak once again!  Golden Retriever Receiver of the Year!  As press flashes go off and the news media goes into a frenzy over Buddy’s ball expertise, the evil Russian circus owner Natalia sees pictures of Buddy with the ball on court and she and her nasty partner decide to steal Buddy.  In the meantime, Josh’s best friend talks Josh into trying out for the football team.  Simultaneously, Josh takes Buddy in for a vet check with Dr. Sullivan.  As Josh realizes that his Mom and Dr. Sullivan are dating, he decides to join football, as practice is in the afternoon and he doesn’t have to watch his own mother make a romantic fool out of herself with this strange Dr. Sullivan.

Of course, Natalie and her husband are on the lookout for Buddy and Josh.  Buddy keeps escaping them.  Then, Josh and his friend decide to take Buddy to Dr. Sullivan claiming his tail is broken so that they can snoop in his office.  Josh finds photographs of Dr. Sullivan with three other women – pretty women.

As Josh and Buddy become football heroes, as Natalie and husband are caught in their vicious schemes, as Josh finds out that all the women in the photos are Dr. Sullivan’s sisters, he grows up.   Josh ends up friends with Dr. Sullivan, Buddy takes the Timberwolves to the state championship, and all is well.  What a great Disney Air Bud movie.  Fun, adorable, coming of age movie for both Josh and his friends, this Disney movie creates beloved footage of Buddy, the amazing golden retriever.

WHAT I DIDN’T LIKE:  I had to go online to find out the family name (Framm) and that Josh’s father had recently passed away.  That made this DVD make more sense.  Also, the names of the circus people were not clear; again I found it online but since I didn’t get it from the movie I left the review as I saw it in the movie.  These are minor things; I just wish I had seen the original Air Bud!  On the other hand, it leaves the review a little mindless on my part, but I reviewed what I saw in the movie.  Again, a great dog lovers movie, I enjoyed it and didn’t agree with some of the reviews that gave it a 2 for a plot that was predictable.  Yes, the plot is predictable, but the movie itself was funny and cute and the dog(s) were magnificent!

Thank you to Walt Disney Studios Home Entertainment for providing us with a copy of this DVD to review. We were not compensated for this post and all opinions are strictly our own.