You are here: Home / They Watch / Music Reviews: American Heroes #3 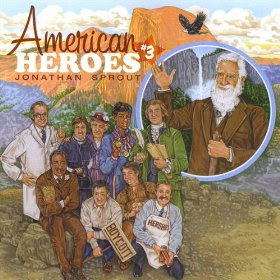 “This album educates and inspires children with original songs about some of America’s greatest citizens.”

This is a great little CD with songs that pop and rock along with Jonathon Sprout’s country western voice.  Songs like “Chocolate Man” (Milton Hershey), “He Will Not Give Up” (Jonas Salk), “Pocahontas”, etc. give us words and vocals to recognize and appreciate some of our great American heroes.  The facts were ones that I had not read, and I felt that this CD would be a wonderful addition to any Mom’s repertoire of CDs for her kids.  A wonderful teacher’s aid, also, to play in the classroom and start conversation among kids about the real heroes of our country.

Very catchy,  very singalong, this CD was one that I listened to in it’s entirety, then read all the information about each person.

Did you know that Milton Hershey (Hershey Chocolates) gave up his entire fortune to a school of orphans which he and his wife ran?

Did you know that John Muir, the father of national parks, was blinded, but with his vision restored, he went on to fight for conservation and our national land for all?

Did you know that Elizabeth Blackwell, America’s first woman doctor, started the first medical college for women in this country?

Did you know that Jonas Salk refused to patent his vaccine for polio so that it could be distributed around the world?

Don’t forget to catch the Grammy’s this year, because after 6,000 performances Jonathan Sprout has been nominated for the upcoming GRAMMY Awards in the “Best Children’s Album” category.

Great CD, wonderful way to expose history to our kids!

is available for purchase at Amazon.com, CD Baby and MORE

Thank you to ASAP Productions for providing us with a copy of this CD to review. We were not compensated for this post and all opinions are strictly our own.