You are here: Home / They Watch / DVD Reviews: The Boys Are Back 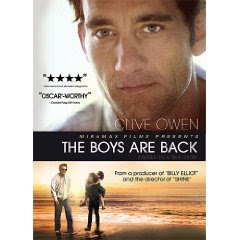 The Boys Are Back

There are so few truly heartwarming movies today, that it’s a joy to be able to say that The Boys Are Back

is a film that really touched me. With it’s superb cast lead by Clve Owen who finds himself a single parent after the death of his wife, this story of love, parenthood and a life turned upside down with fill you with emotion and lift your spirits.

Based on the true story of sportswriter Joe Warr (played by Owen) and mostly set on Australia’s breathtaking south coast, this movie that could have been ordinary – is extraordinarily striking. Arte (Nicholas McAnulty) as the six year old son with a zest for life and the energy of a dozen boys makes Joe’s job just that much more “interesting.” When Joe brings his estranged son (George MacKay) from a previous marriage to live with them this new family becomes a challenge. Joe’s parenting skills are a bit, well…unorthodox, making for some wild moments.

A potential romance is thrown into the mix, when the mother of one of Arte’s school friends takes a liking to Joe. With typical familial problems, this film could have been a yawner. Fortunately, the outstanding acting as well as director Scott Hicks’ impeccable eye have created a movie that’s Oscar worthy.

The Boys Are Back

is available for purchase from Amazon.com for $19.99 or from retailers nationwide.

Thank you to Walt Disney Studios Home Entertainment for providing a copy for our review. We were not paid for the content and all opinions are strictly our own.